Baptism of Christ, painted by Robert Dowling in 1863, was housed in a church in Scotland since the 1930’s. The Art Gallery of South Australia acquired the painting in 2019 before the church was demolished. Dowling was Australia’s first colonial trained artist and first expatriate artist, who left Australia in the 1850’s and built a successful career in London.

The painting had never received conservation treatment but a coat of varnish had been applied, upon speculation, when it was stored in the church. This varnish had sealed in pollutants it had acquired in London from traffic, coal fires and gaslights, forming a visible crusty layer over its surface. The church was very damp causing mould and mildew, further disfiguring the paintings surface. Dampness had caused shrinkage in the canvas causing paint to erupt from the surface as ridges of loose paint. The back of the painting was thick with sooty pollutants and mildew, and fortunately, the artist had had the foresight to apply a reversed loose lining protecting the painted canvas. However, it had rotted along the top edge causing the painting to slump out of the frame.

The conservation of Baptism of Christ was complex due to the large size of the painting and its damaged condition. The first stage of treatment was to brush vacuum the front and back of the painting removing loose pollutants followed by a aqueous clean to eliminate grime. Solvent cleaning removed the old varnish layer and finally, repeated aqueous cleaning dissolved stubborn grime ingrained in the paint layer.

Loose areas of paint were temporally faced with Japanese tissue using a wax-based adhesive and the canvas was removed from the stretcher onto a specially made support. The areas of loose paint were impregnated with consolidant from the back and pressed flat, fragile tacking edges were reinforced by strip lining and distortions in the canvas, pressed out. Because the loose lining carried an inscription by the artist it was also cleaned, consolidated and its tacking margins strengthened. Both canvasses were placed on the stretcher. The painting was given a conservation grade varnish and a small amount of retouching completed the work.

The original frame was quite significant as it was custom made for the painting with religious iconography at top centre, with cherubs in the corners and biblical text on a panel, bottom centre. The frame, covered in grime with one of the cherubs missing, had considerable areas of worn gilding with a large amount of damage to many elements on the frame.

The frame received a thorough cleaning treatment and all elements of iconography strengthened and repaired. A new cherub was cast and attached followed by an extensive gilding process reinstating large areas of the frame.

Baptism of Christ is now on display in Gallery 3 at the Art Gallery of South Australia, Adelaide. Baptism of Christ before conservation treatment. Detail of canvas showing contrasts before and after cleaning. 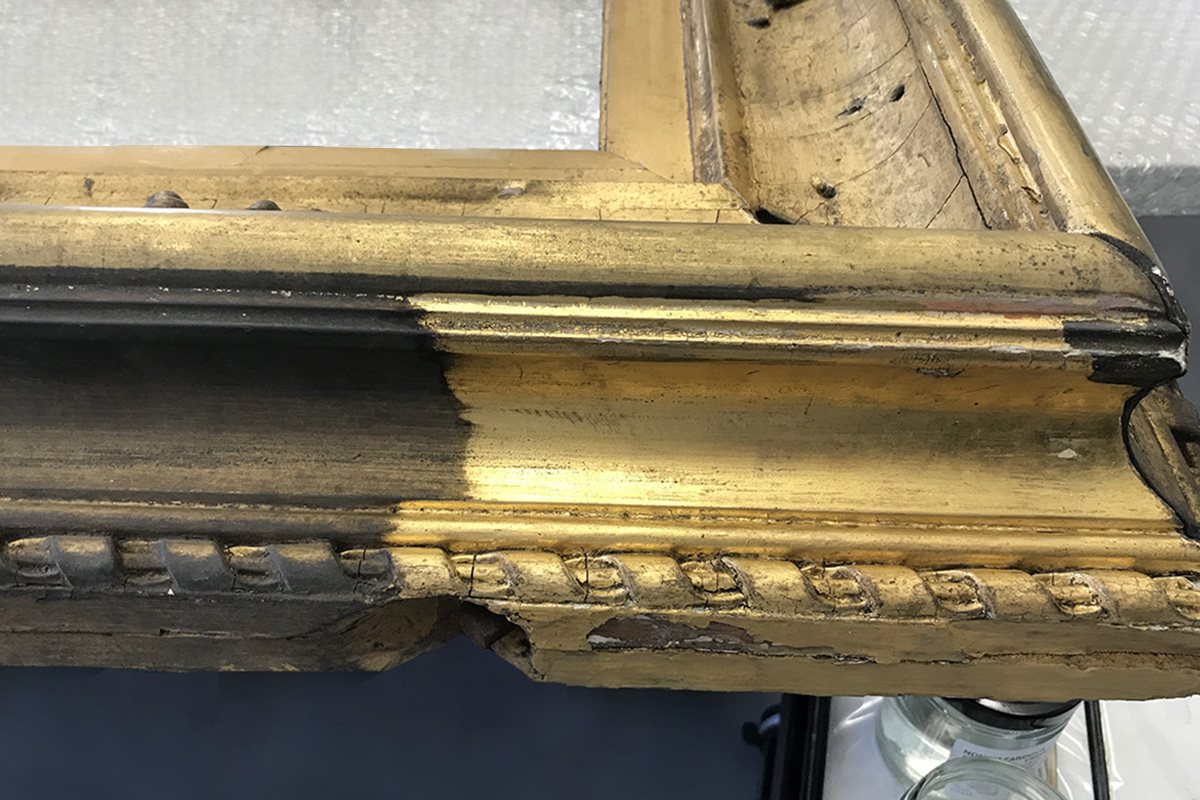 Detail of frame showing contrasts before and after cleaning. 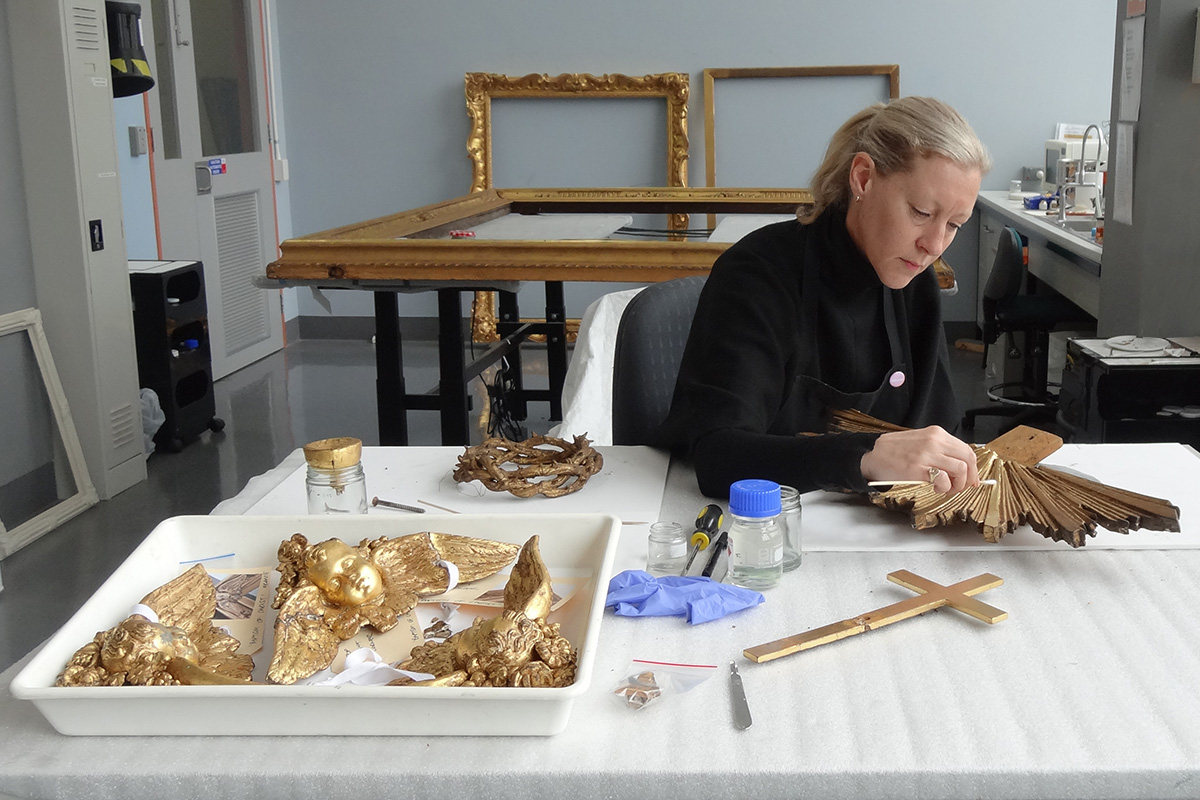 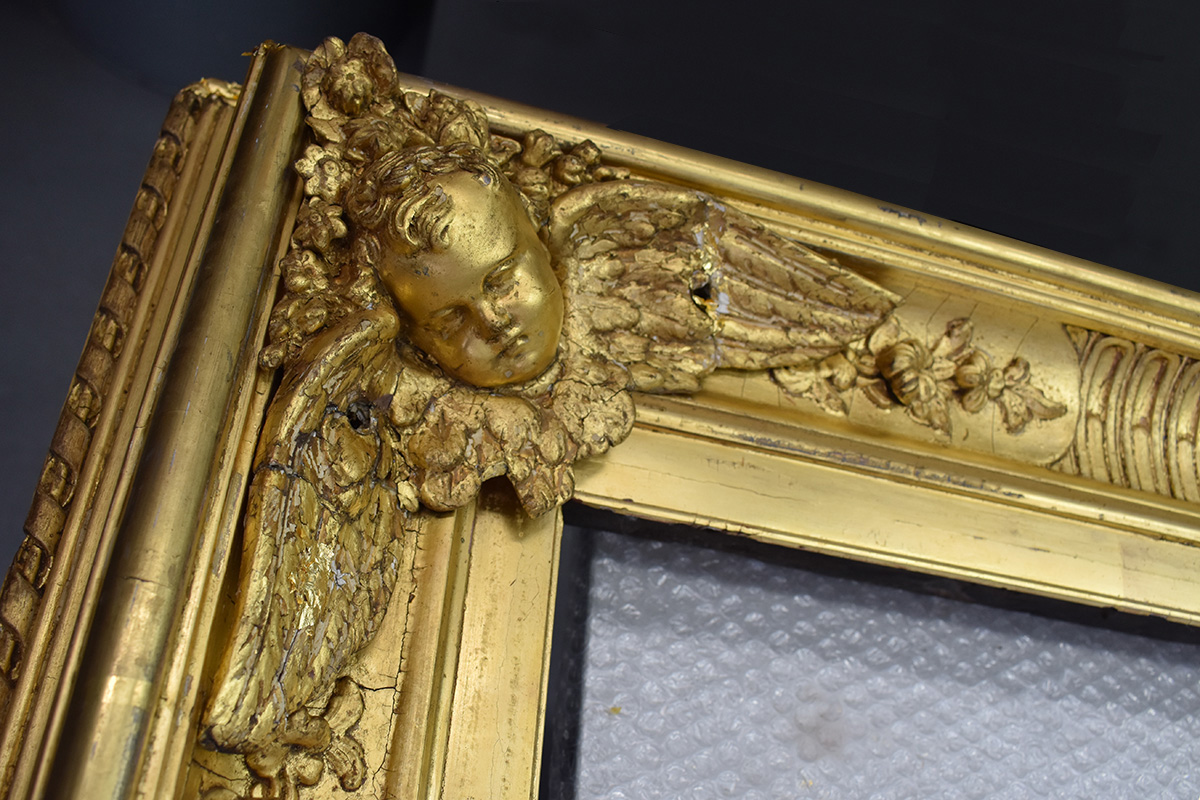 Baptism of Christ after completion of conservation treatment to painting and frame.