The Blackwood Soldiers War Memorial, located in Blackwood, South Australia, was constructed in 1921 to honour those who served in the Great War. It received subsequent plaque additions to the base over the years to mark those who fought in later conflicts. In 1922, the Blackwood Uniting Church was built near the monument and the foundation stone for the church was laid the same year as the memorial in 1921.

The Department of Planning, Transport and Infrastructure (DPTI) engaged Bardavcol to undertake works on the Blackwood roundabout upgrade which included relocation of the Blackwood Soldiers War Memorial. Various new sites for the memorial were considered however, after public consultation it was decided the monument should be moved slightly closer to the church. In July 2018, Bardavcol Pty. Ltd. invited Artlab to conduct investigative work to develop a removal methodology for the memorial.

The monument was found to be in an unstable condition structurally, with structural cracks and an inadequate supporting foundation. The surface was poor with small losses, cracks, ingrained dirt and accretions.

Bardavcol engaged Artlab Australia to remove, conserve and reinstall the Blackwood Soldiers War Memorial in November 2018. Artlab removed sections of the monument to gain a clearer understanding of previous construction methods. From the information gathered, a final relocation and treatment procedure was produced.

Heritage planning permissions were granted and a completion date for the project was set at ANZAC Day 2019. Works begun and the first stage was the removal of the memorial, which commenced on 12th November 2018.

The memorial column was prepared, dismantled, and lifted in three parts. The soldier, capital and remaining column were transported by sensitive freight to Artlab where they were dismantled, cleaned and repaired.

Artlab also disassembled the steps and black granite apron surrounding the monument and these sections were cleaned and prepared for reinstallation. Bardavcol constructed a new foundation in the chosen location closer to the Church and the sections were re-assembled, following conservation and structural engineering specifications.

Bardavcol landscaped the roundabout area and all practical works were completed for the unveiling of the Blackwood Soldiers War Memorial on 18th April 2019. 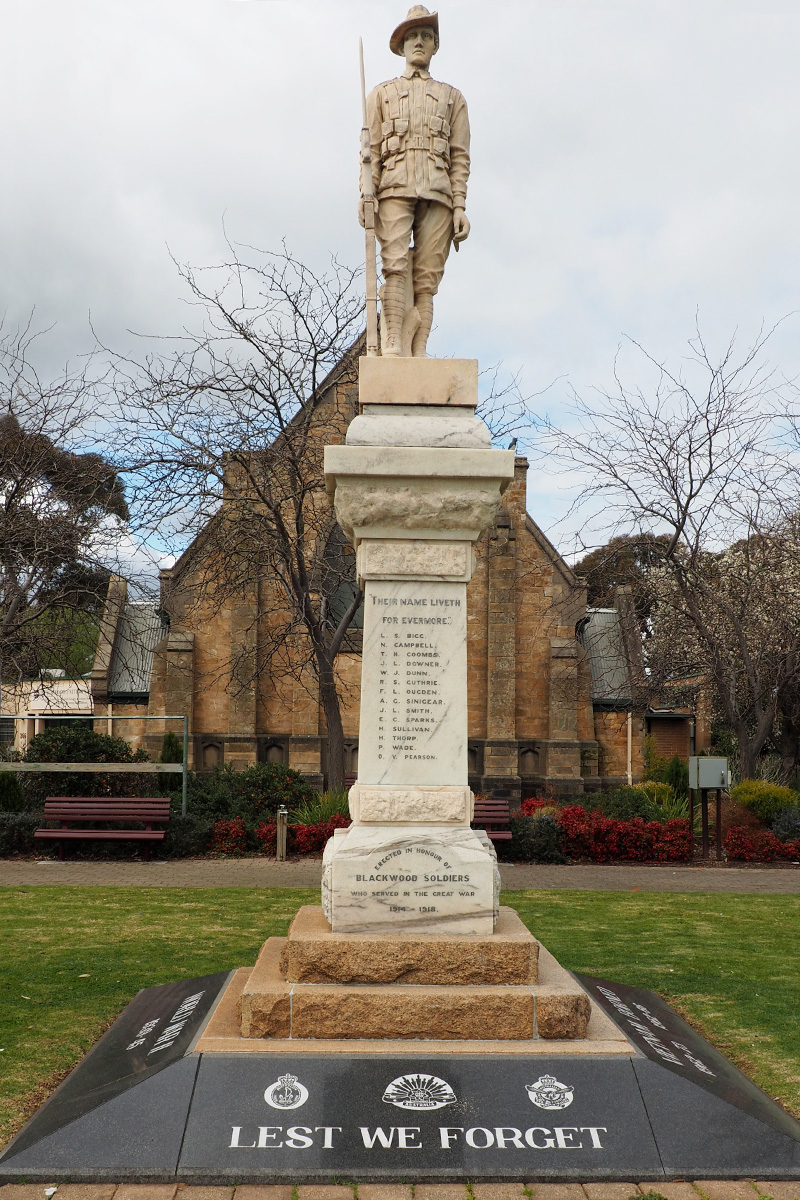 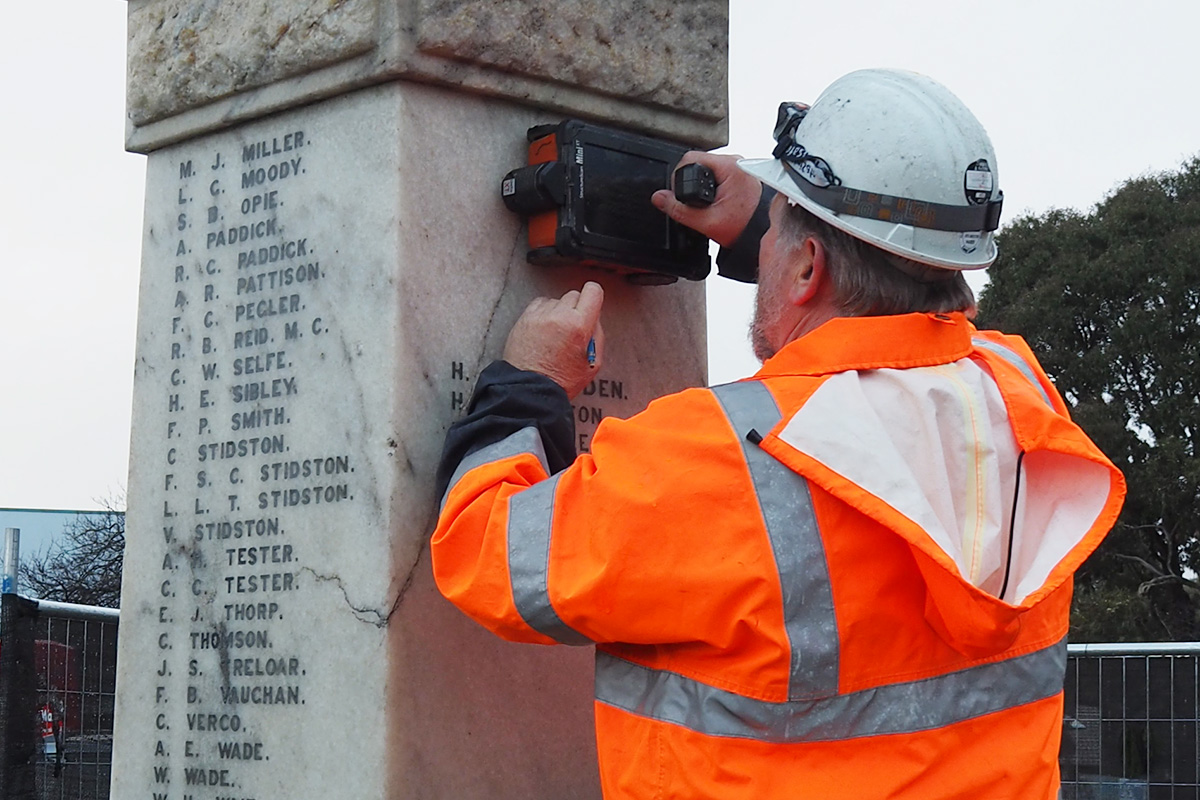 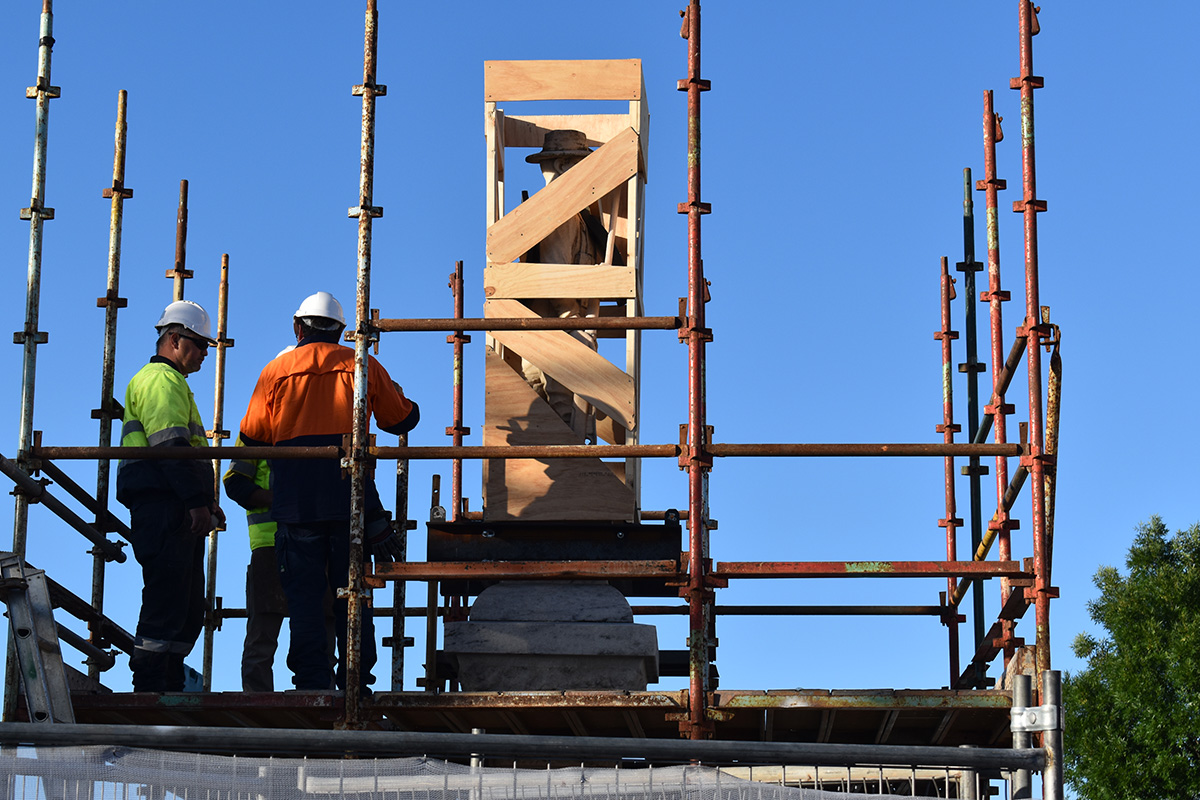 The removal stage of the memorial managed by Ian Miles, Senior Metals Conservator. 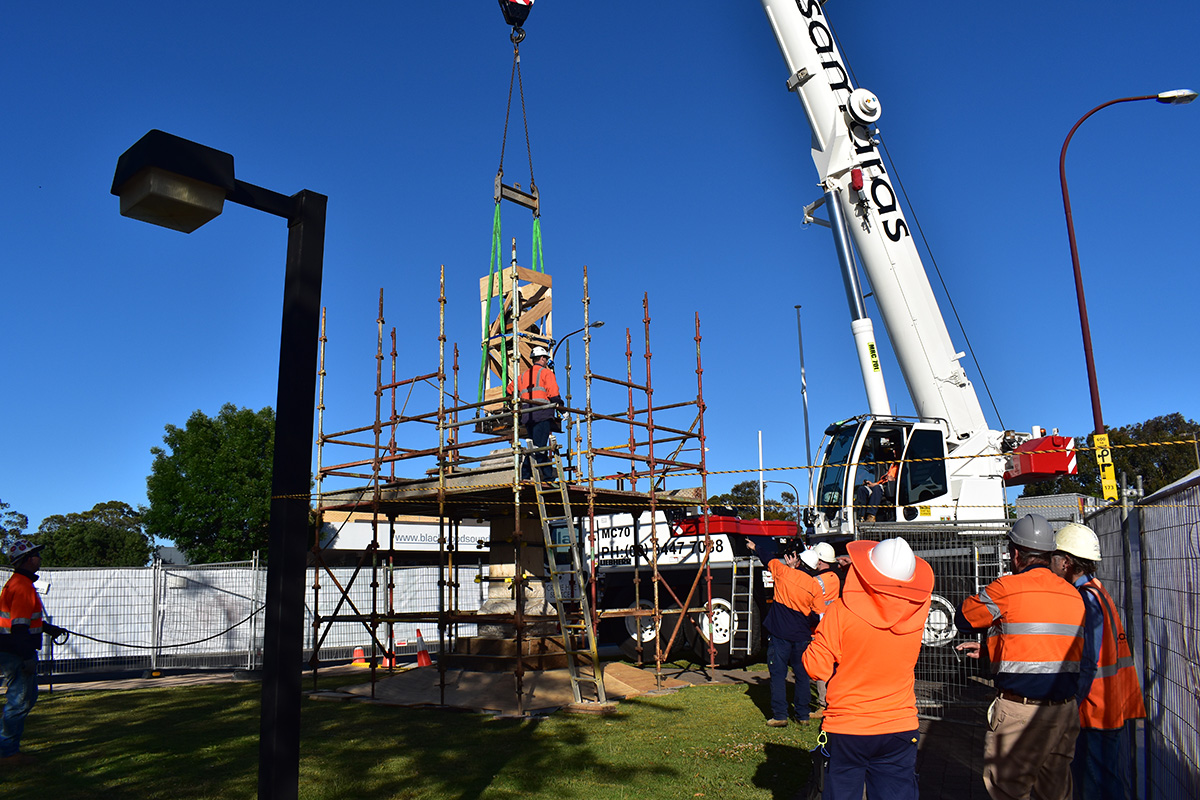 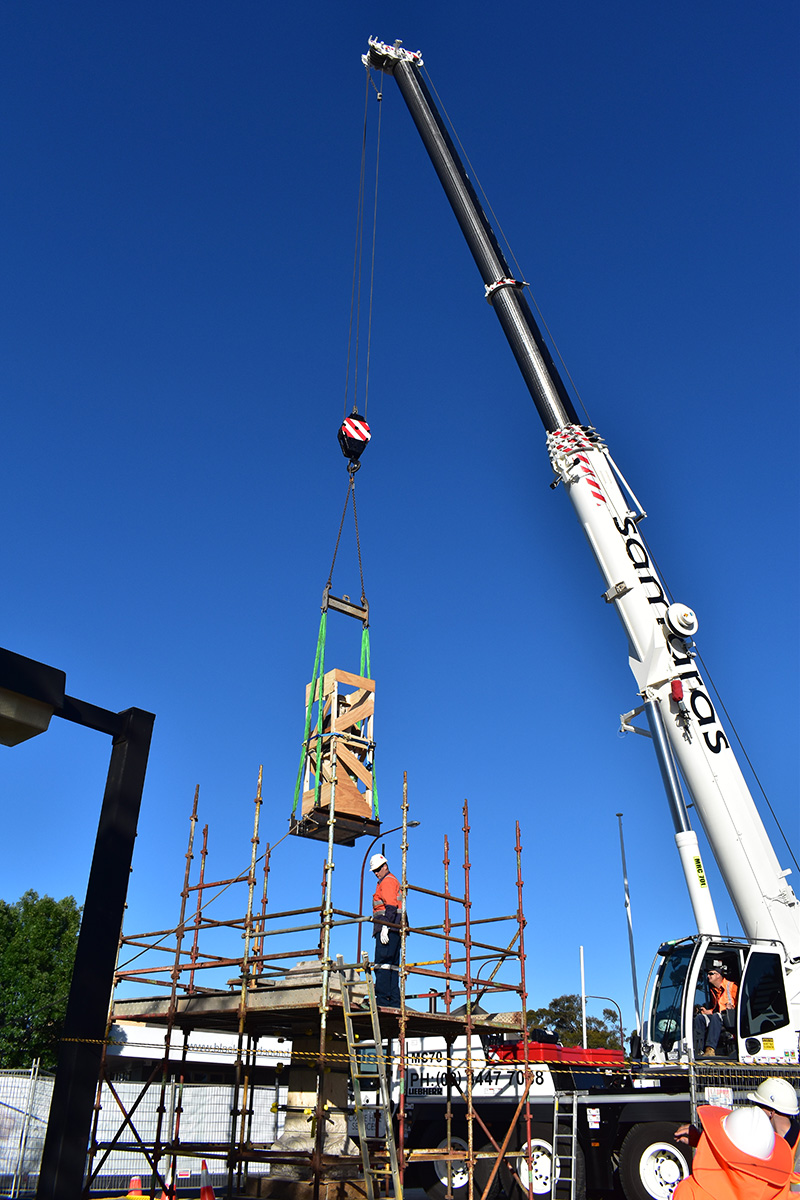 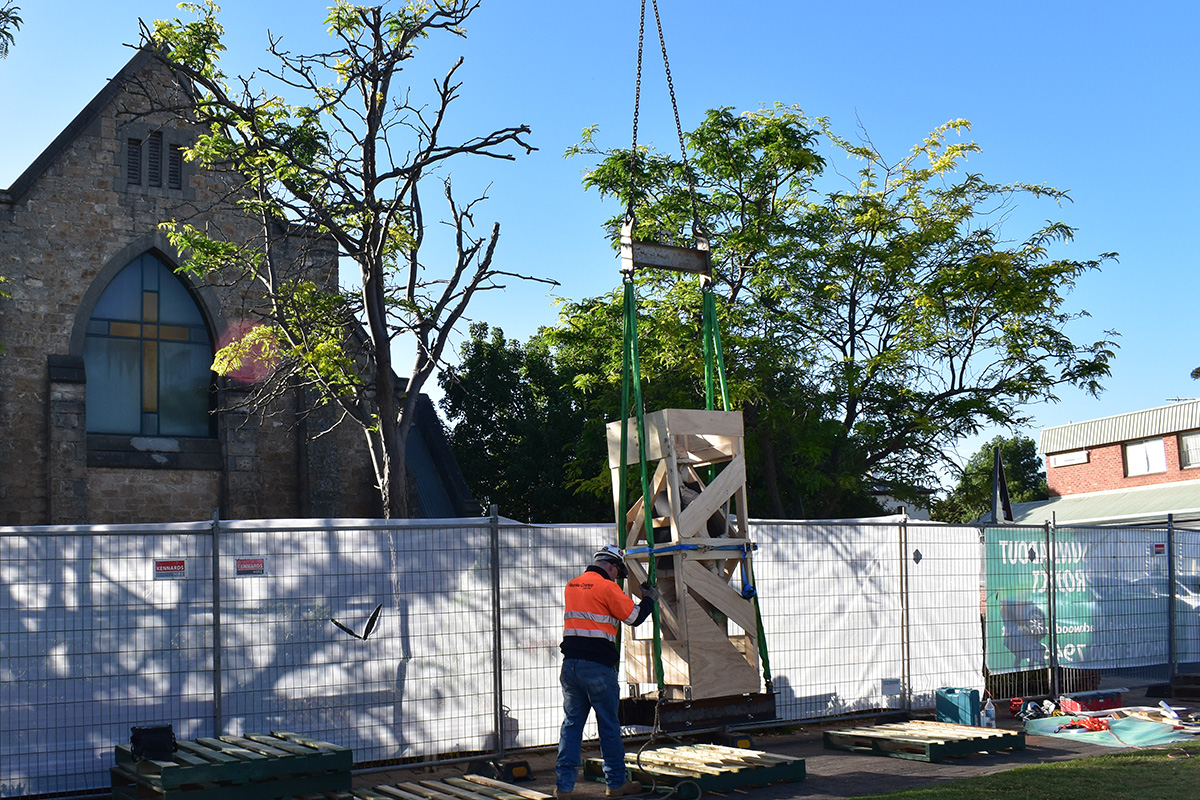 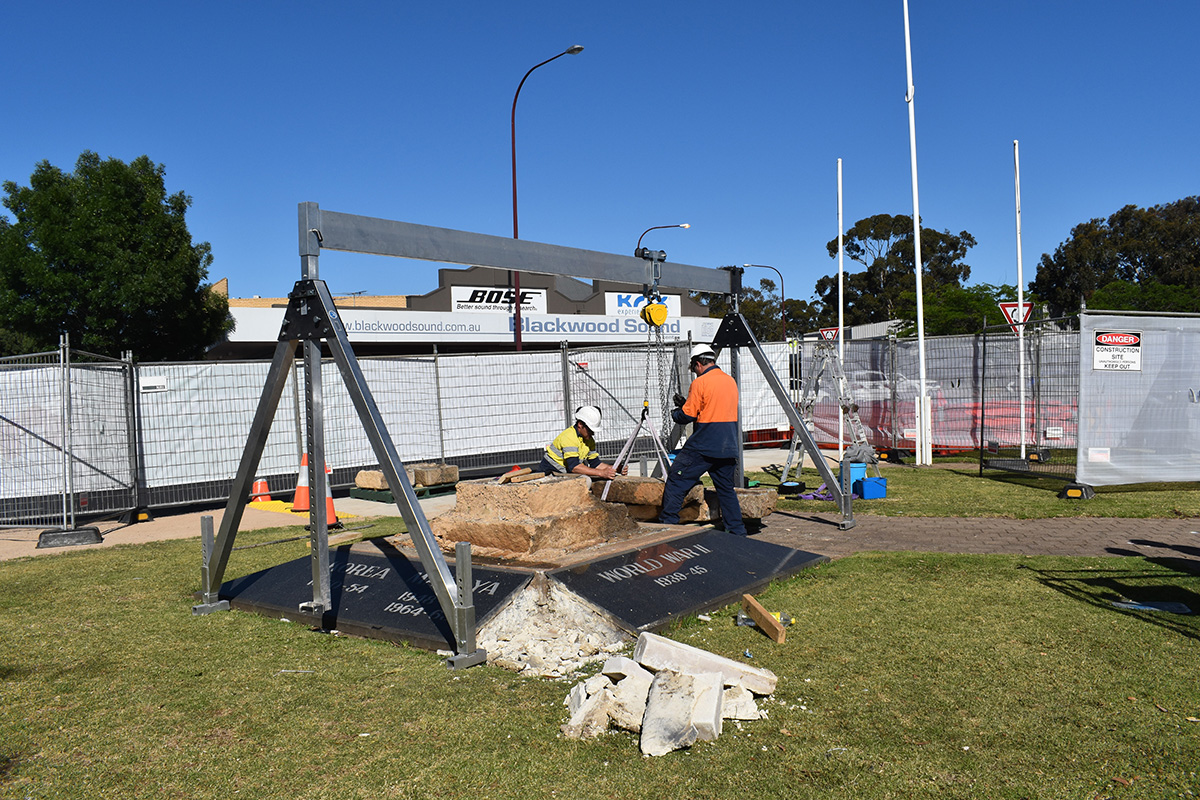 Ian Miles steam-cleaning the surface of the monument at Artlab. 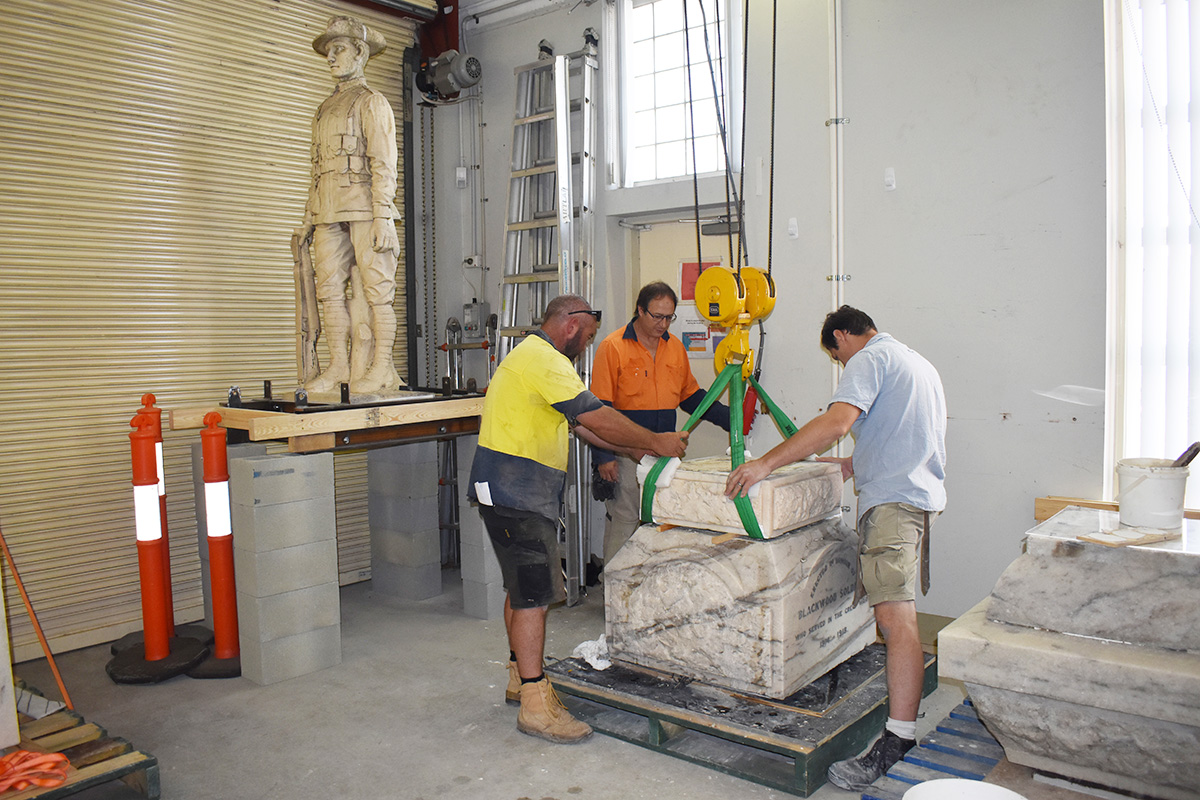 Fixing the base band to the memorial base. 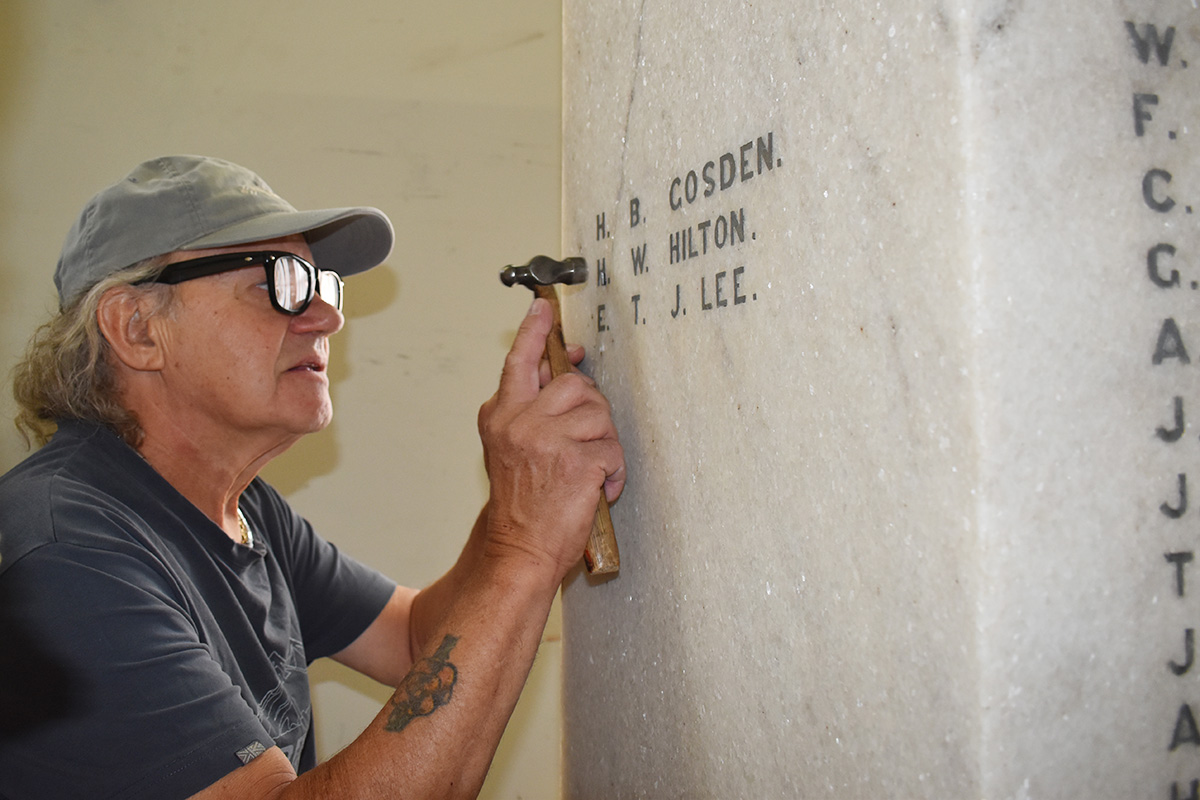 Soldier section during cleaning treatment, right side poultice applied, left side after removal of poultice. 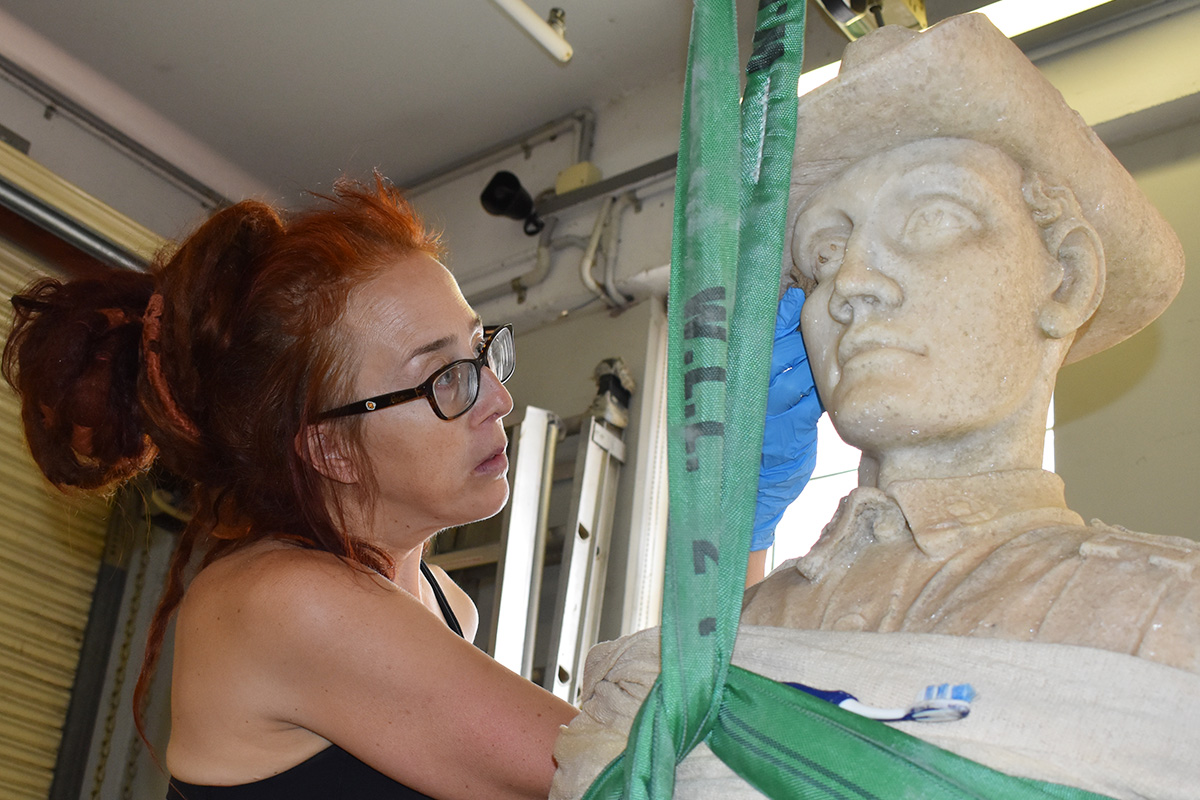 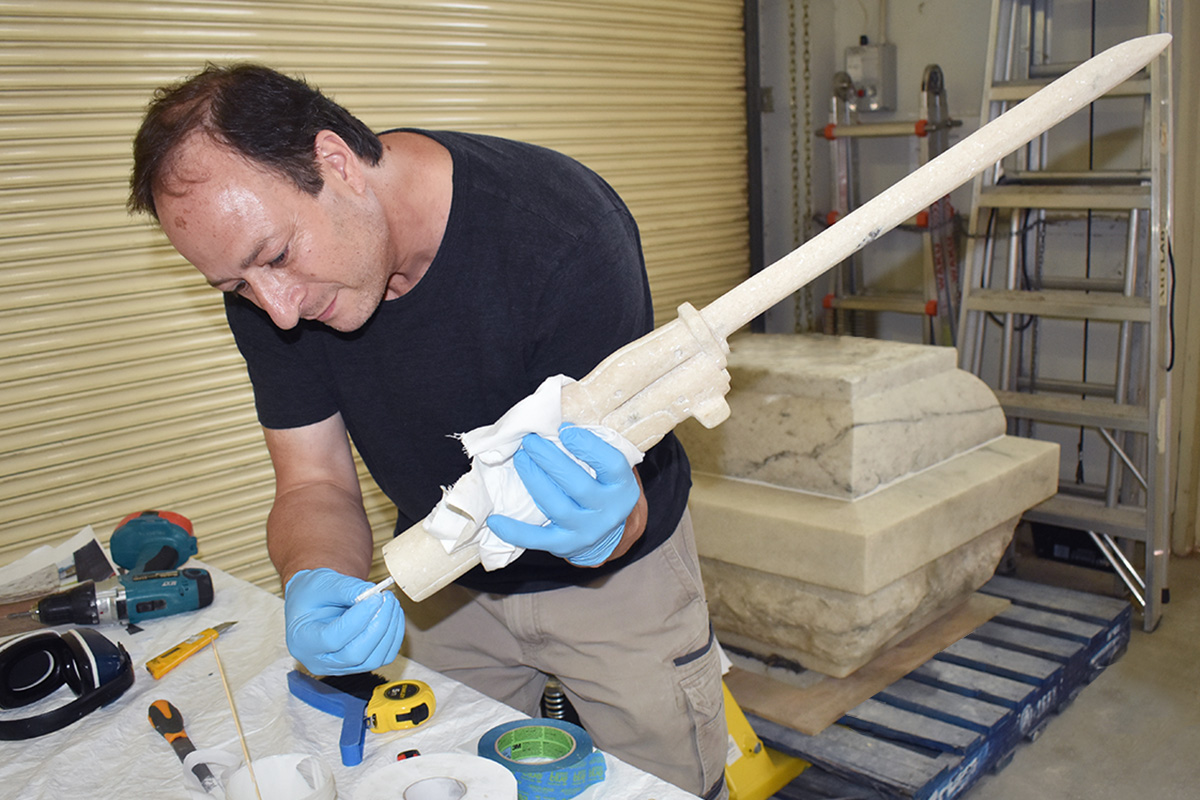 Installing pin to rifle before fixing back in place on solider section. 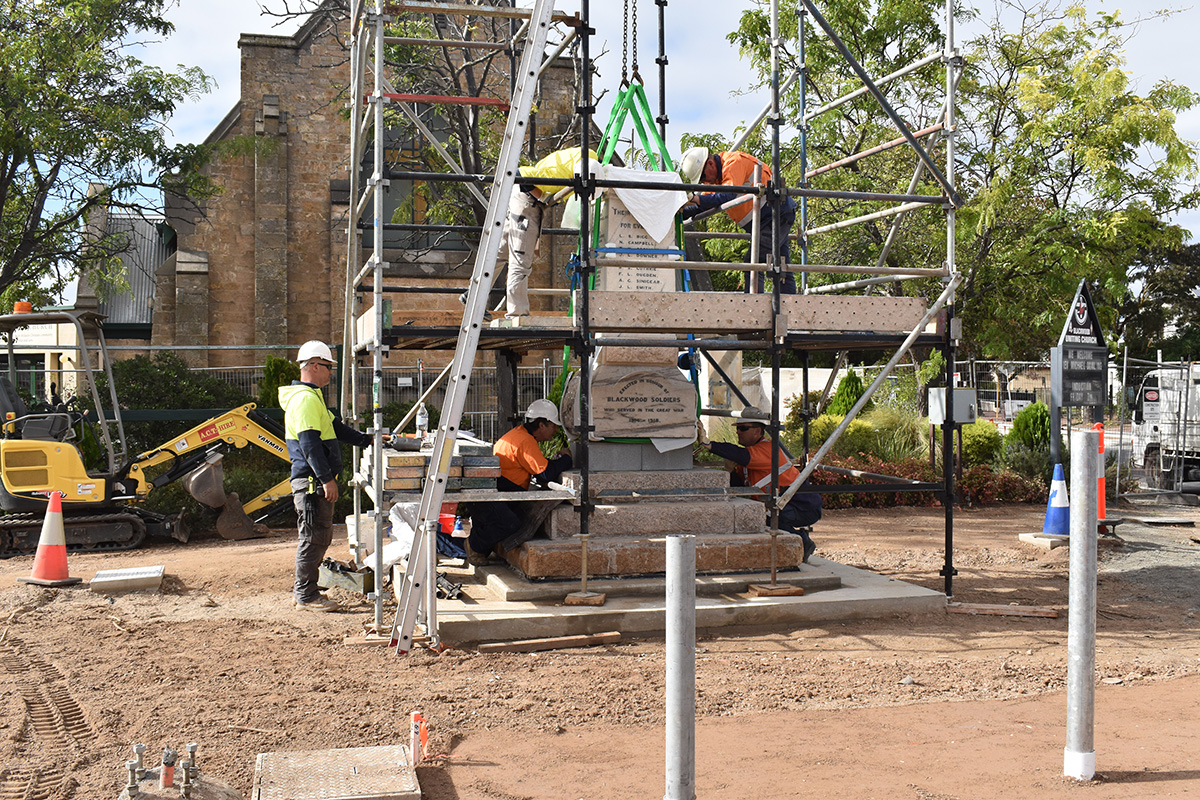 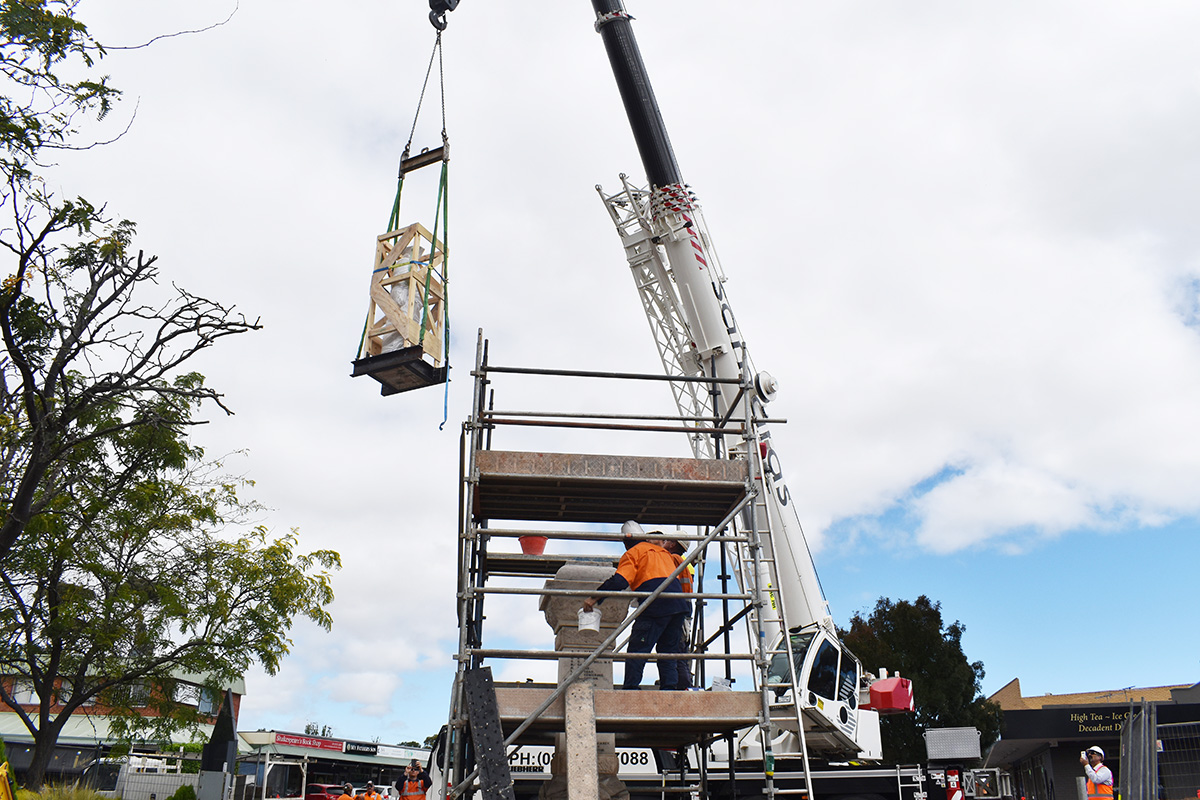 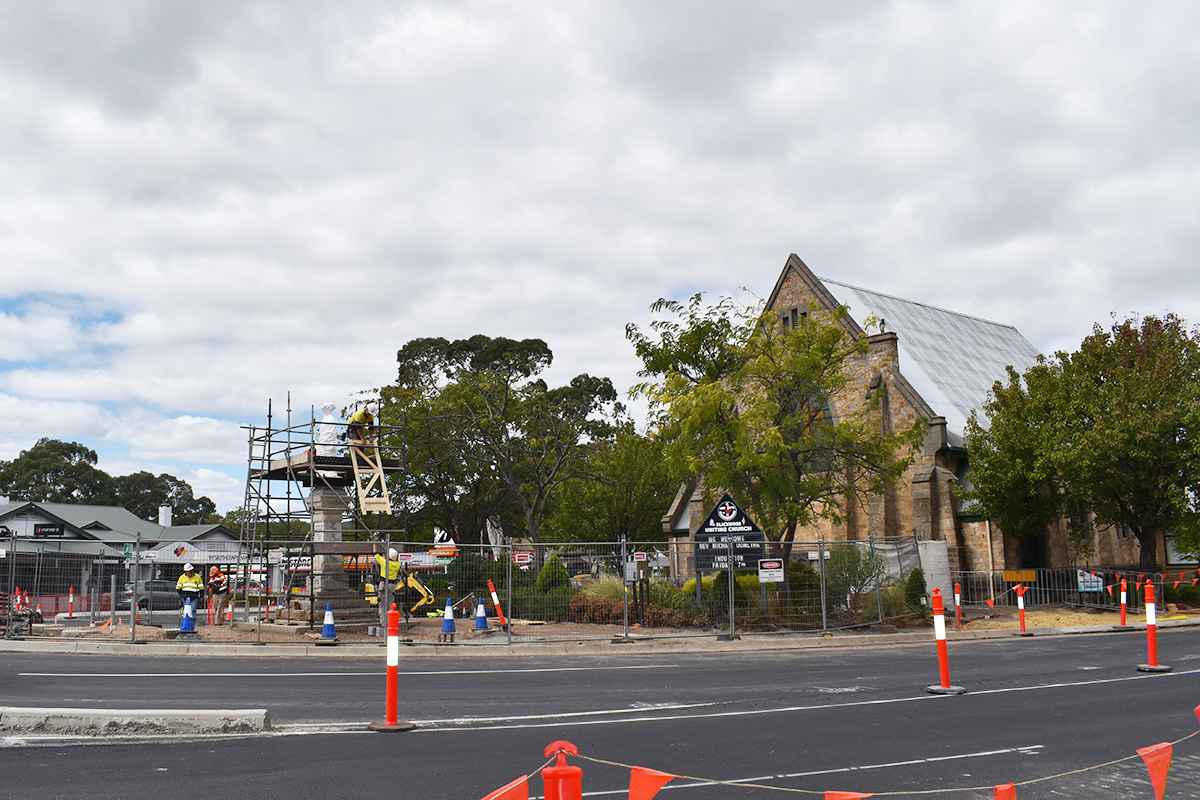 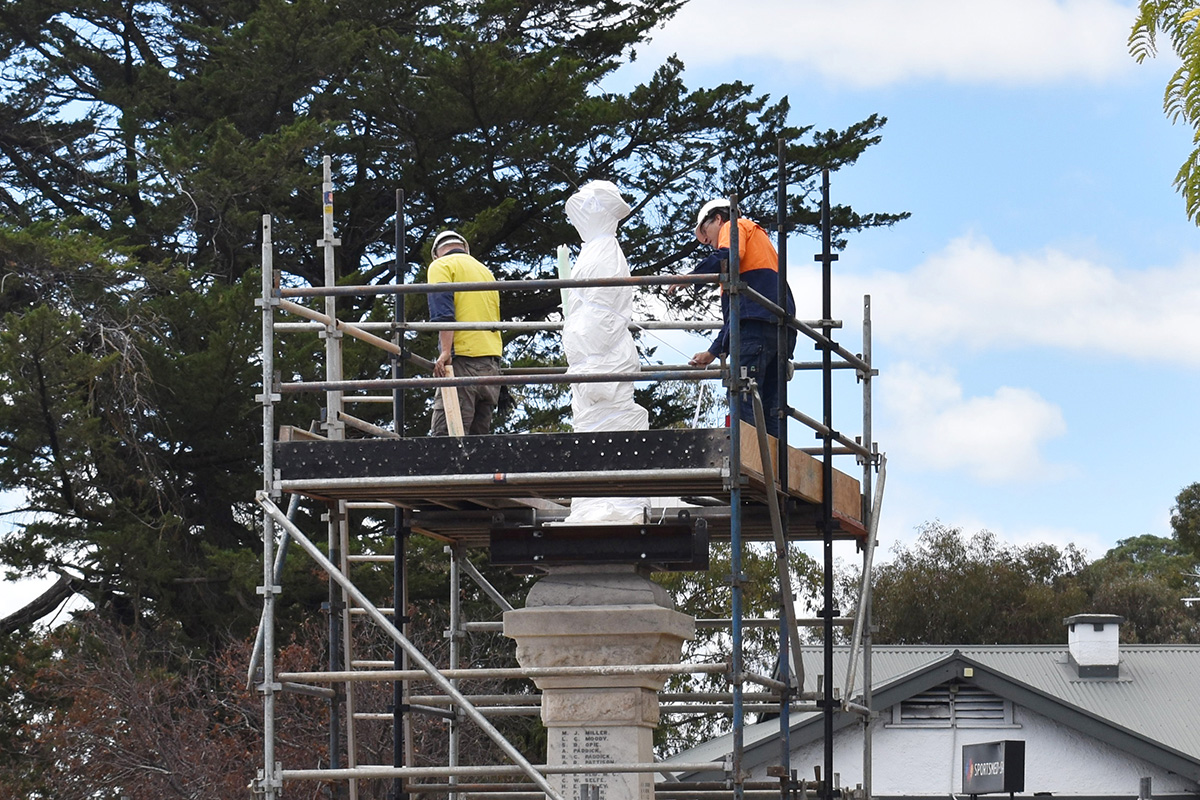 Fixing the existing plaques to the surrounding base of the memorial. 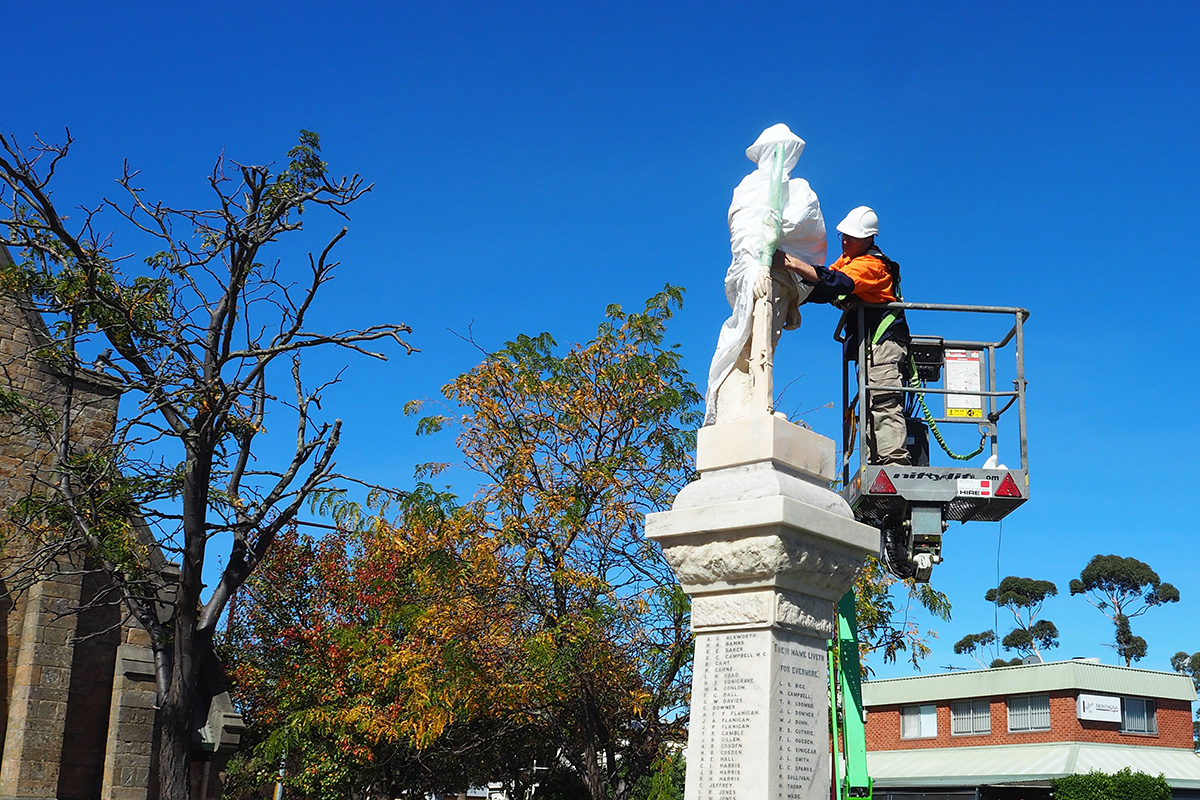 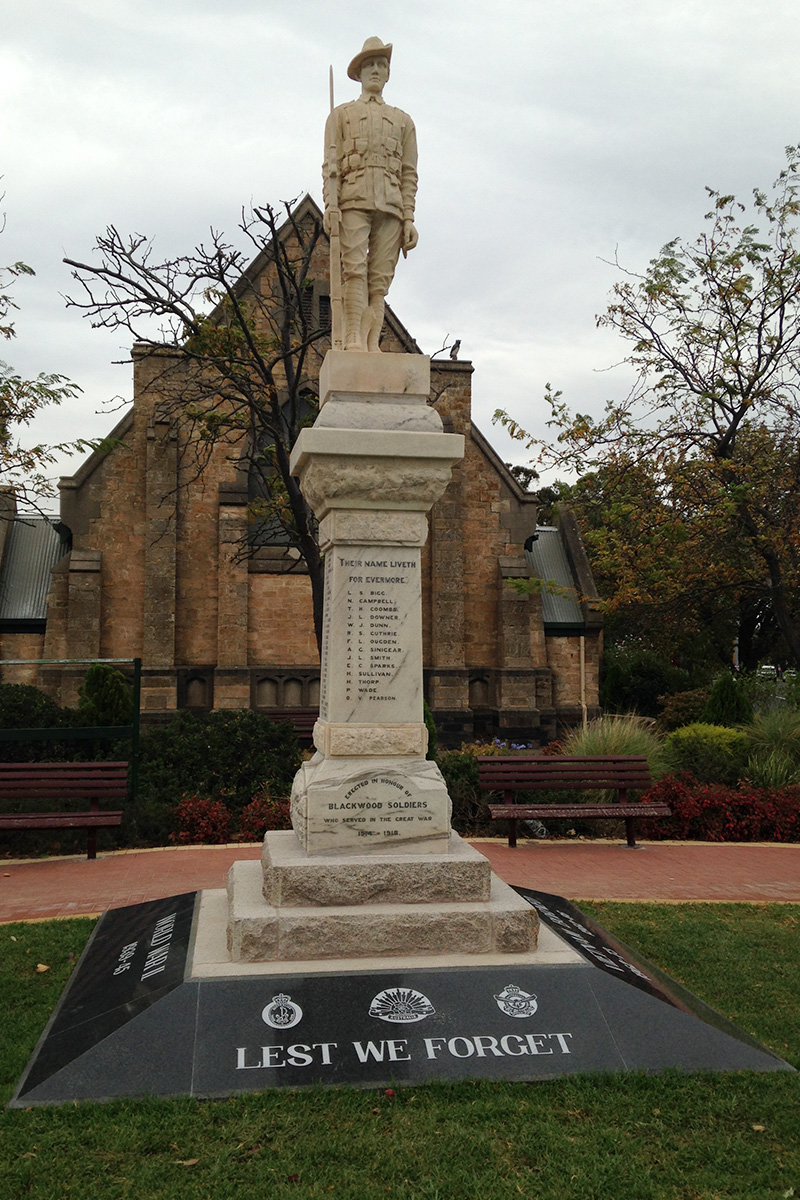