The Eureka Flag was flown on 3 December 1854 at the battle of the Eureka Stockade on Bakery Hill in Ballarat, Victoria. Miners battled with police defending their rights and liberties under the flag flying, their symbol of defiance. The battle was swiftly over in fifteen minutes and the miners were defeated. The flag was lowered by Trooper John King and was used as evidence during treason trials in 1855. It was never claimed by anyone after the trials so the flag was returned to John King, who had retired from the force and became a farmer.

In 1895, John King’s widow Isabelle was approached by James Oddie, President of the Art Gallery of Ballarat Association who asked if the flag could be loaned to the gallery and become part of their collection. Isabelle agreed to this request and in 2001, the gallery Director approached the descendants of Trooper King asking if they would consider legally gifting the flag to the Art Gallery of Ballarat. The King family generously agreed to this arrangement.

The Eureka Flag is listed as an object of significance on the Victorian Heritage Register and was declared a Victorian icon by the National Trust of Australia in 2006. It is part of the collection of the Art Gallery of Ballarat and is on long-term loan to the Eureka Centre in Ballarat where it is on public display.

In 2010 the flag was transported in a custom-built crate under tight security to Artlab, for a extensive conservation treatment. The Textiles team where aware of the previous conservation work carried out in Ballarat in 1973, saving the flag from further deterioration. Thirty-seven years later, conservation practices and materials had improved enabling Artlab’s conservators to treat the flag with a new approach.

Examination of the flag revealed the restoration work in 1973 involved rearranging parts of the flag which were inaccurate so the Textiles team planned to reverse the previous treatment and position the sections true to its original configuration.

Artlab’s Objects Conservator designed and constructed a sewing table with a sloping surface, enabling the conservators to work safely and comfortably while hand stitching the flag.

The first stage was to remove the old lining and begin three hundred hours of hand stitching the flag. The conservators sewed with a polyester thread finer than a human hair and meticulously stitched each loose thread in to position. Additional support stitching was carried out in other sections on the surface. A new wool fabric lining, dyed a neutral grey, was sewn to the back of the flag on completion of the hand stitching process.

In February 2011, Greg Mackie, Deputy Chief Executive of Cultural Development in the Department of Premier and Cabinet, welcomed the Mayor of Ballarat, Cr Craig Fletcher; Chief Executive Officer, City of Ballarat, Anthony Schinck; Mrs. Joy King, descendant of Trooper John King and other guests to Artlab for a viewing of the flag and a progress report.

The next stage of treatment was to prepare the flag for display. A new rigid and lighter backboard was constructed at Artlab made of an aluminium frame with aluminium honeycomb in-fills. It was covered with two layers of fabric, an underneath layer of flannelette and a top layer of cotton sateen. The flag was carefully hand sewn to the fabric-covered backboard around the edges and throughout the centre.

The two metre by four metre Eureka Flag was finally raised upright in preparation for transportation and the Mayor of Ballarat and Chief Executive Officer, City of Ballarat visited Artlab again to witness this important moment, seeing an Australian icon revived and ready for the journey back to Ballarat. 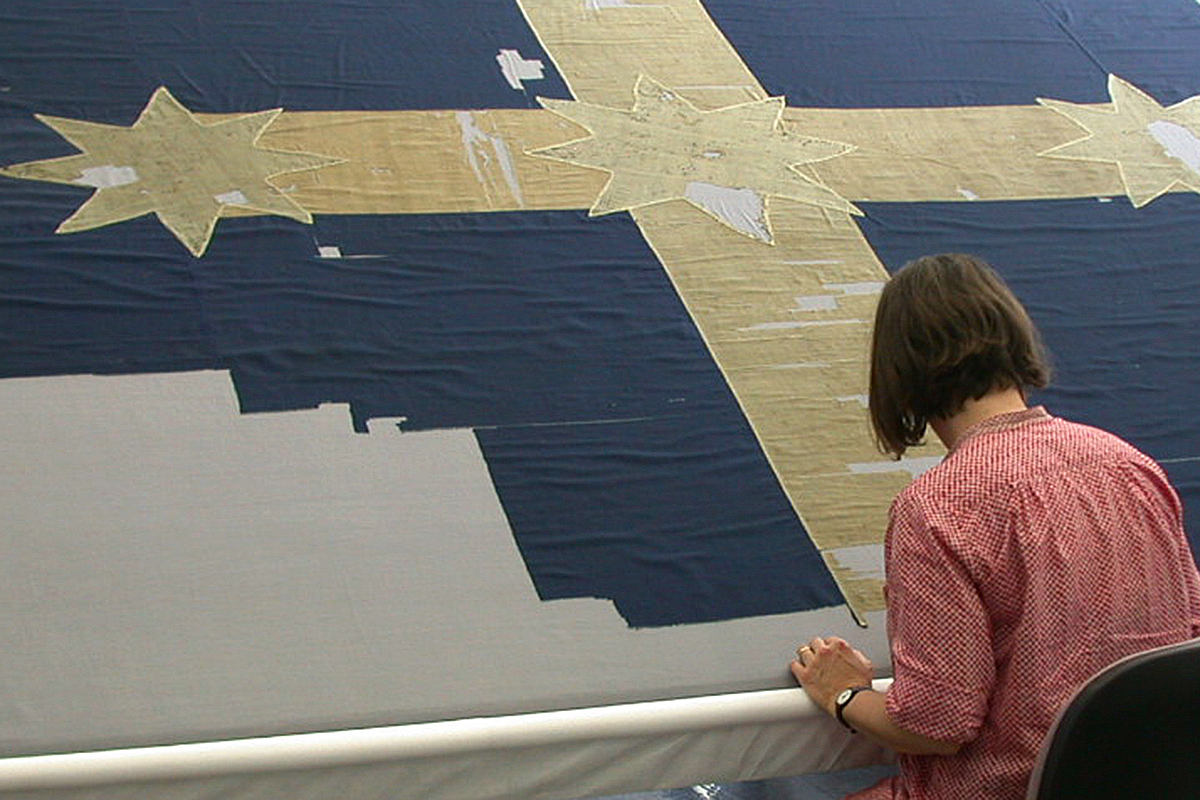 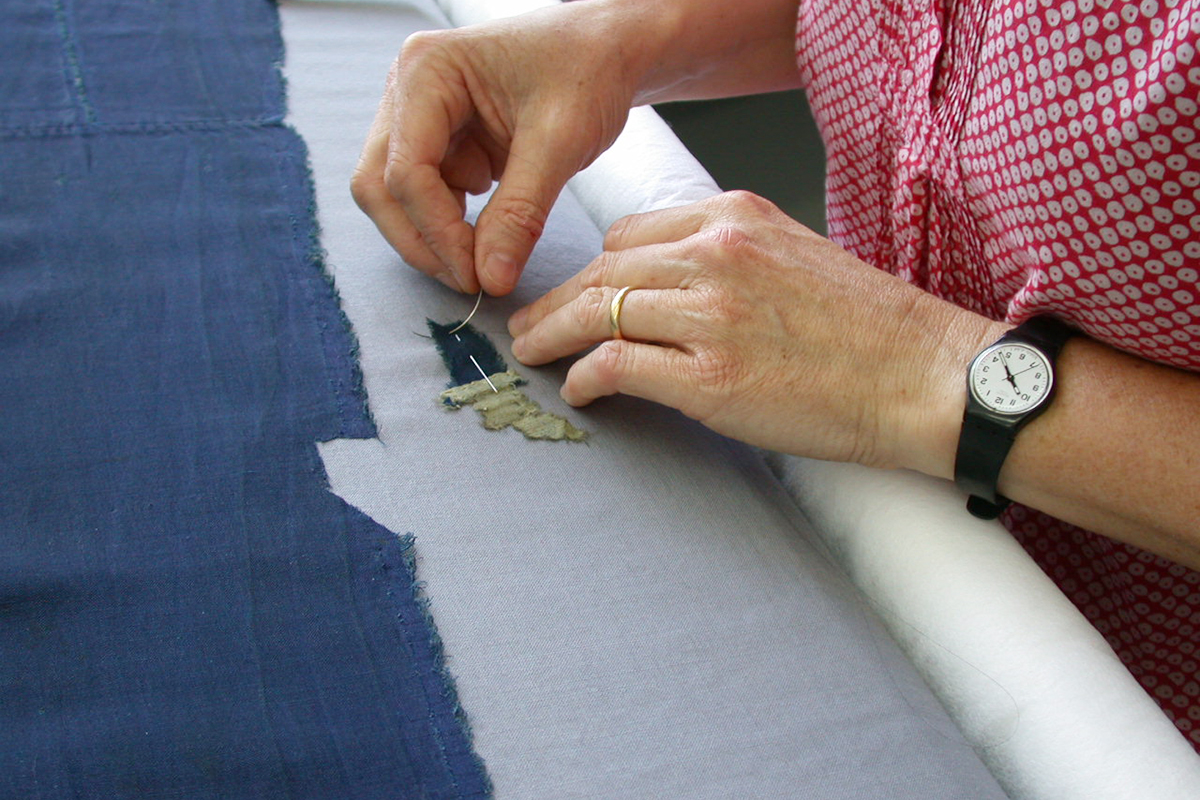 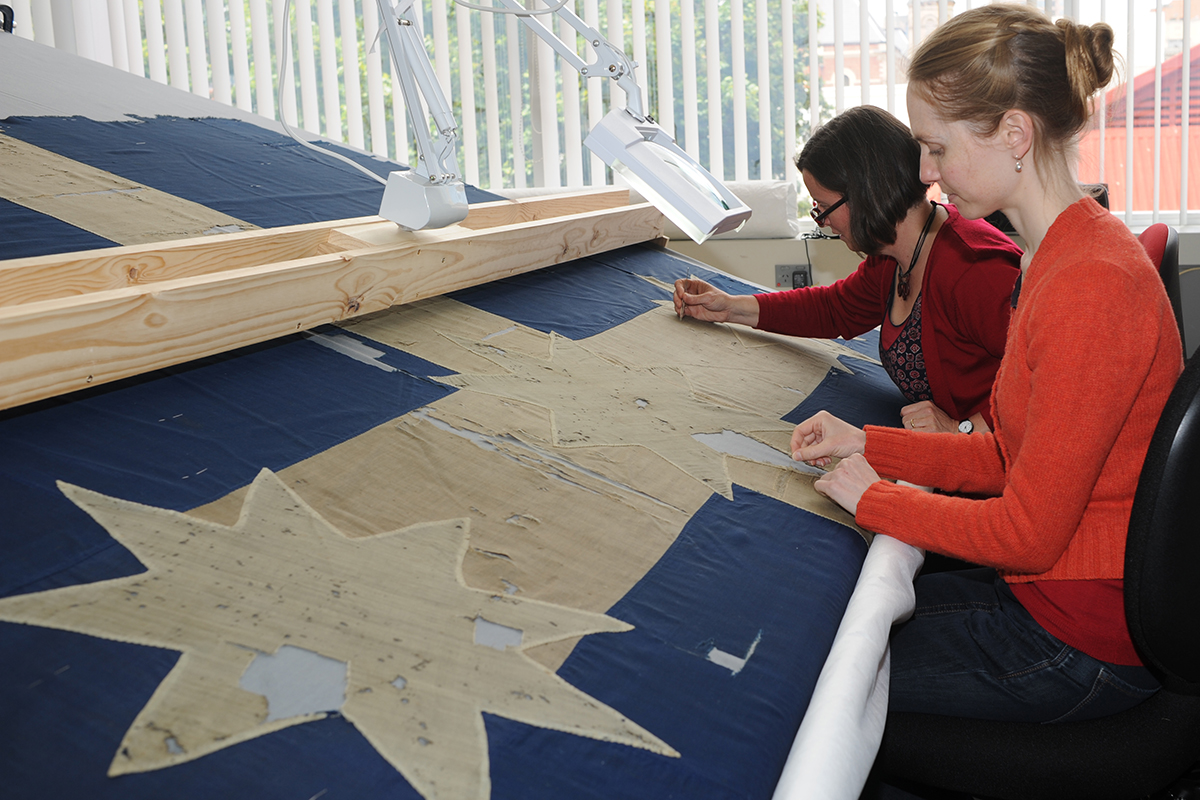 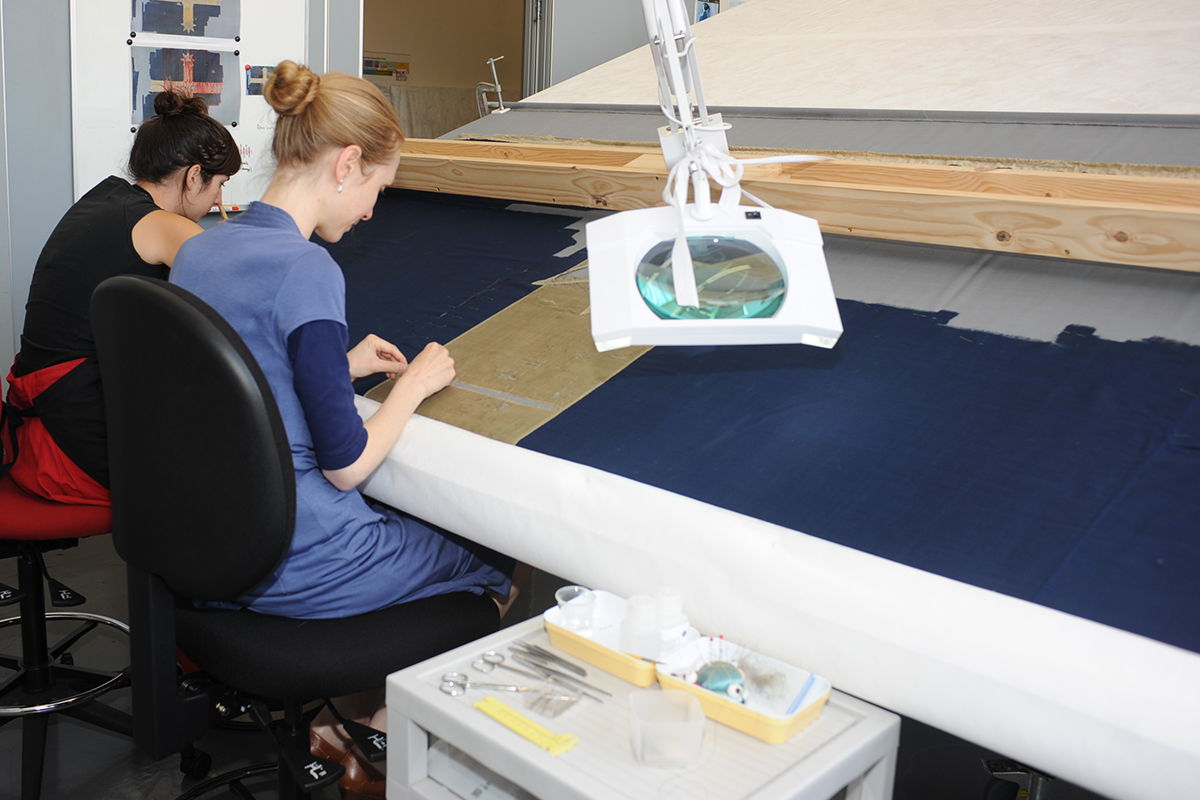 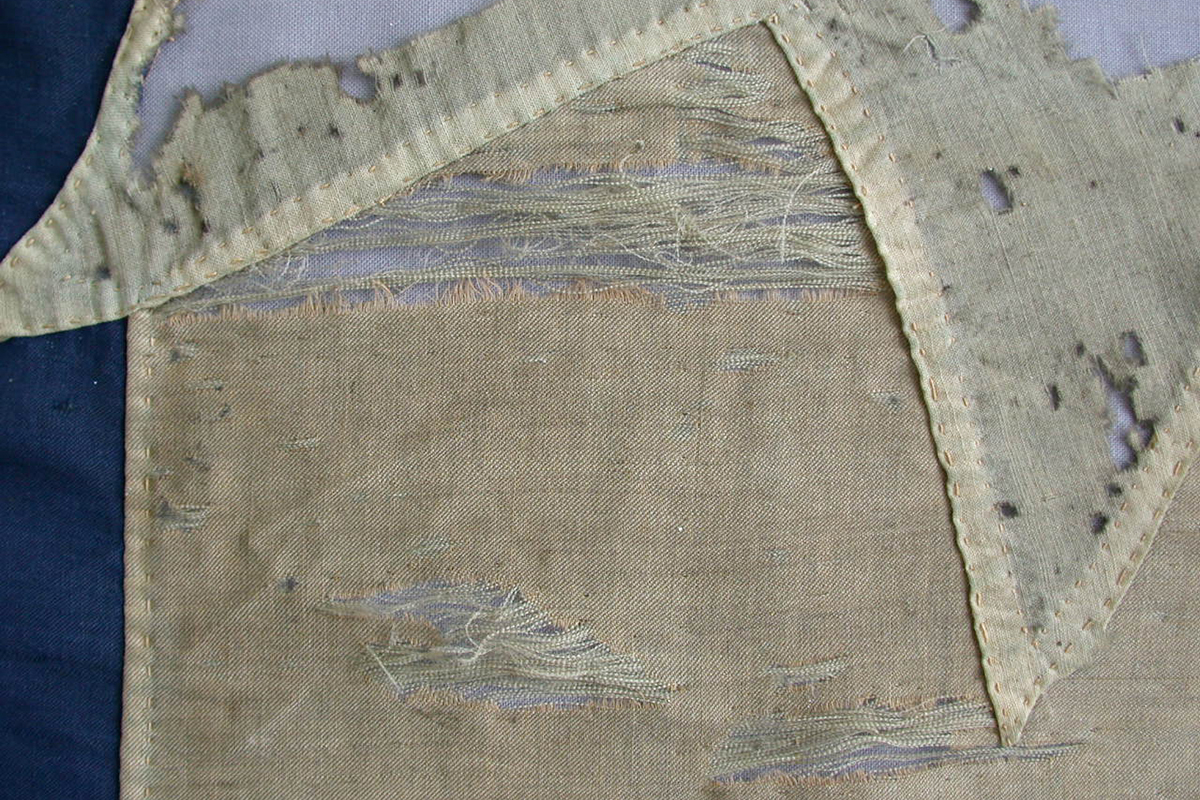 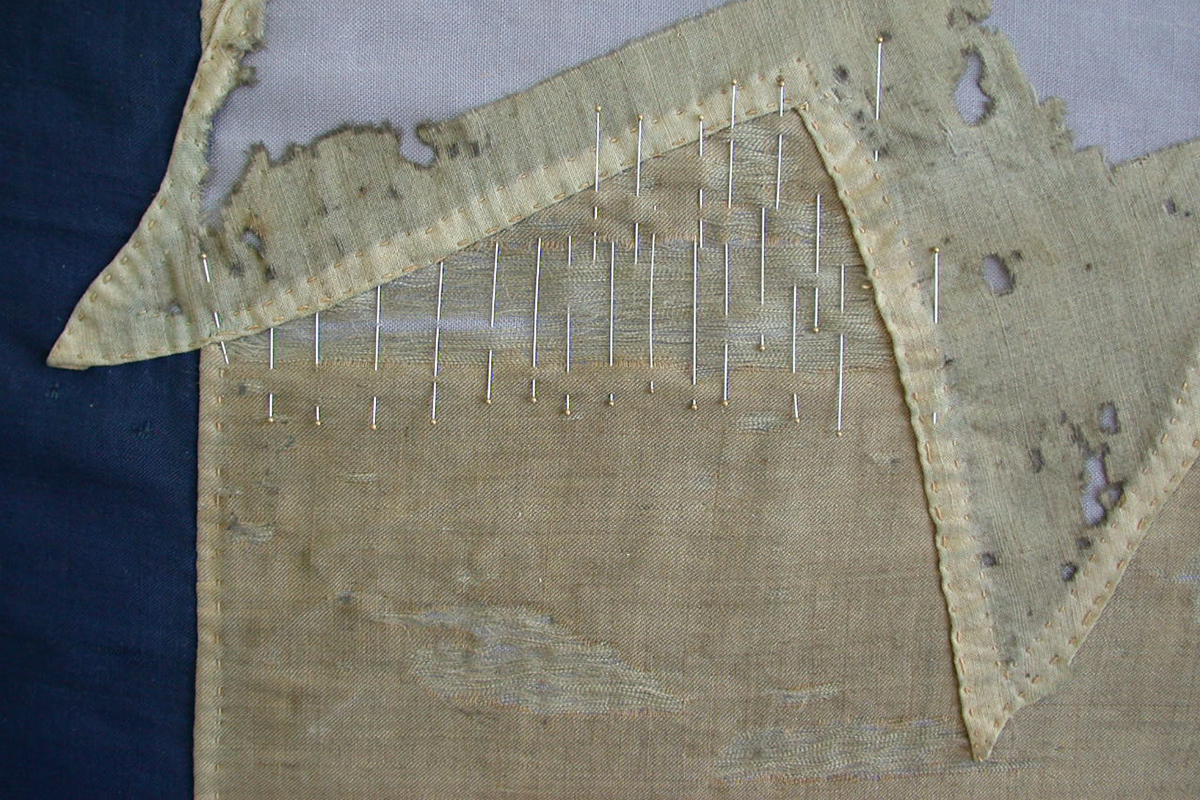 The threads were pinned in preparation for stitching.

After stitching, the threads were aligned and held in place with fine polyester thread. Justin Gare constructing the aluminium backboard which he designed for the Eureka Flag project. 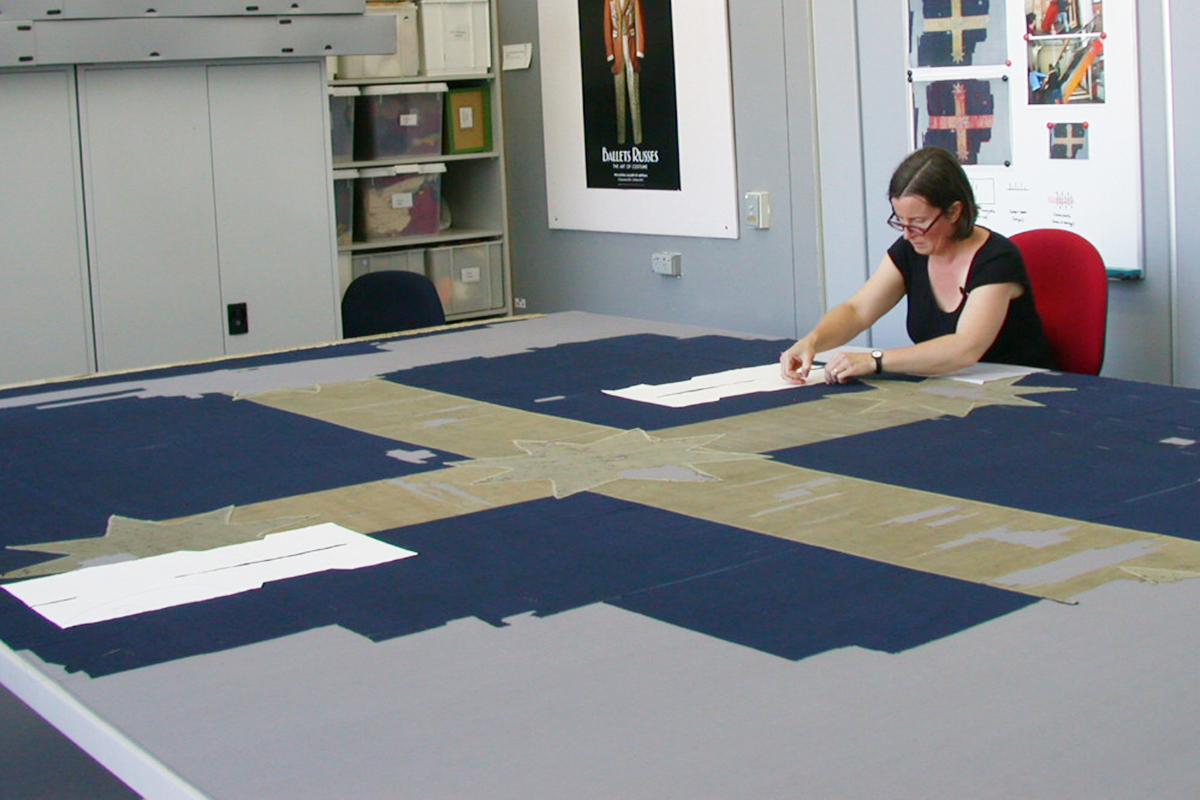 Kristin Phillips realigning some of the fragments. 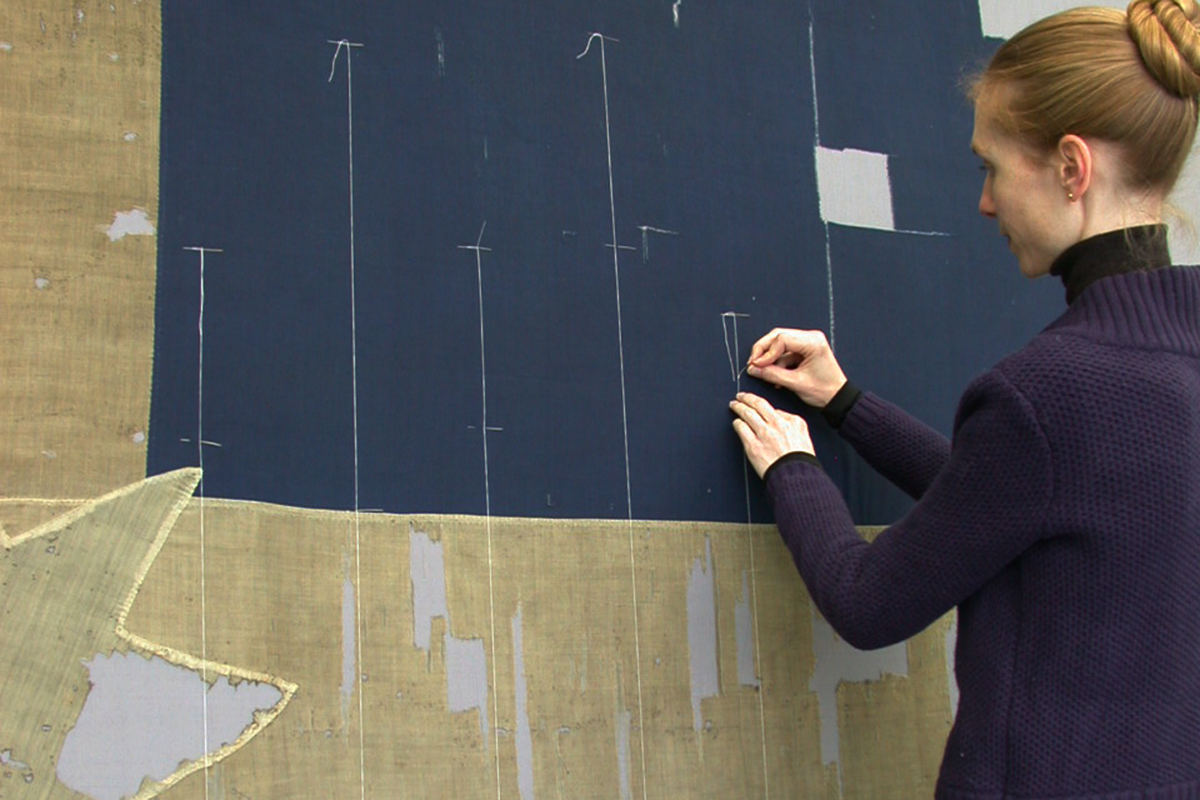 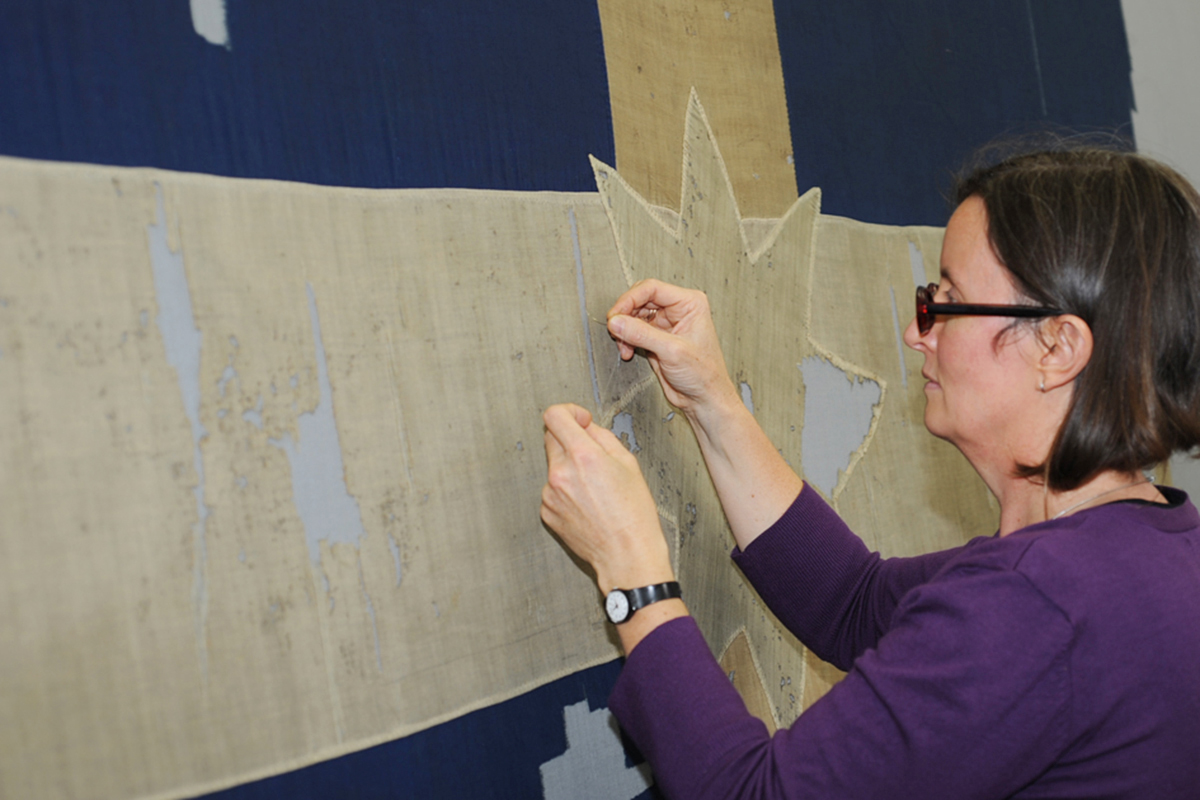 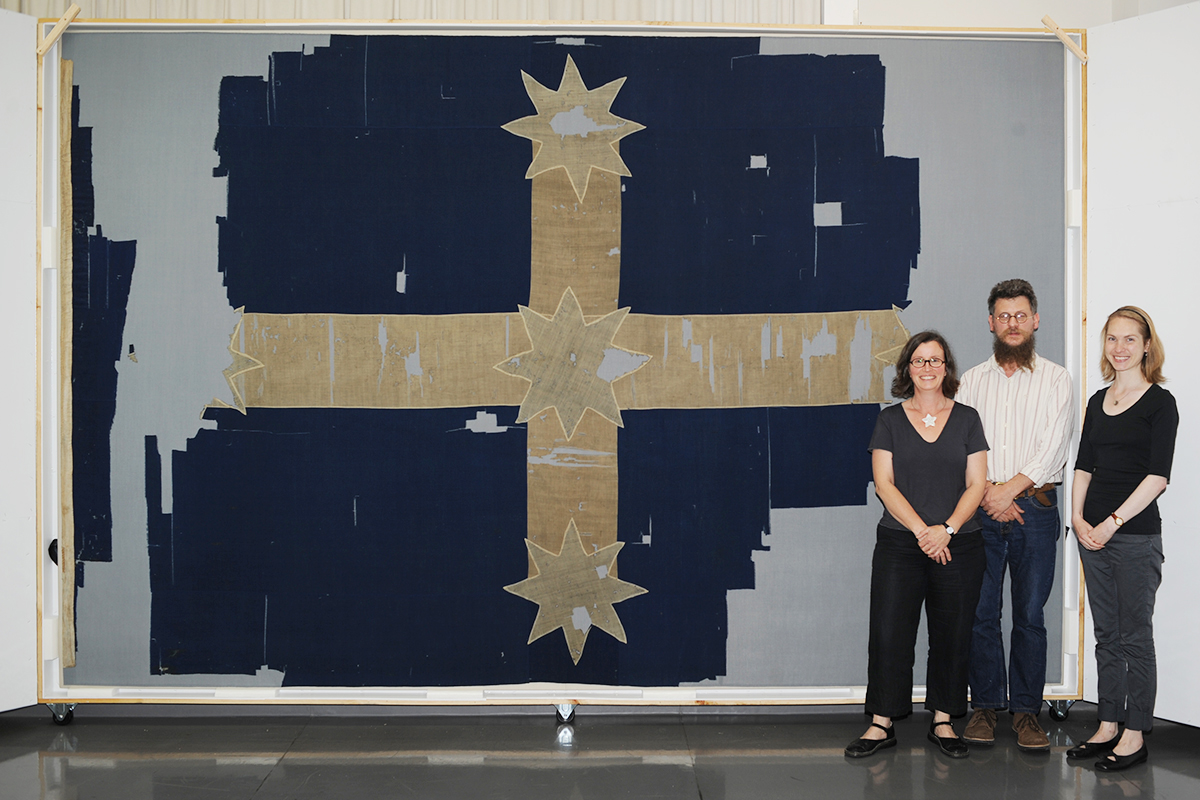 Kristin Phillips managed the Eureka Flag project pictured with Justin Gare and Mary-Anne Gooden with the completed flag after treatment.