Matthew Beovich was issued a papal bull from Pope Pius XII confirming his appointment of Archbishop of Adelaide on 11 December 1939. Archbishop Beovich governed the Archdiocese of Adelaide from 7 April 1940 to 1 May 1971.

A bull is the highest rank of document produced by the Vatican chancery. Since the last six hundred years’ papal bulls have been made with very little changes in their material composition, execution technique and diplomatic text. The term “bull” comes from the Latin word “bulla” meaning seal, most frequently made of lead. The seal features the name of the pope on one side and the embossed images of St Peter and St Paul on the other, replicating the design of the papal ring.

Roberto Padoan, Principal Conservator Paper worked closely with the Archivist and Records Manager from the Catholic Diocesan Centre, Lucy Farrow, who provided vital information about the conservation history of the document. Following the notes written by the archbishop, the bull was sent from Rome in a mailbag by a Dutch airliner which crashed in to the sea near Java in 1939.

The papal bull was successfully rescued from the wreckage and carefully dried. Unfortunately, the document deteriorated during the last eighty years rendering the parchment brittle, fragmented and difficult to read. Parchment is a skin-based material which can last for thousands of years in ideal climatic conditions, but in this case, the document had been exposed to extremely high temperatures and was fully immersed in salt water. This dramatic combination of events brought the edges of the parchment to an irreversible stage of gelatinization, causing the document to shrink and loose flexibility.

The conservation treatment included various stages: relaxation under controlled humidity, stabilisation of tears and missing areas from the verso using Japanese paper, tensioning on a frame, infillings, mounting on a rigid board and boxing.

It was essential to maintain low humidity levels and reduce environmental shocks as much as possible during the treatment. The relaxation and tensioning stages were slowly carried out over a period of three months, allowing the parchment to gradually adapt to the changes.

Finally, the papal bull was flow-mounted on a buffered museum board with Japanese paper hinges and cotton strings to hold the seal in place. A rigid backing support of foam board and museum board was constructed ensuring the document would be secure inside the archival storage box. 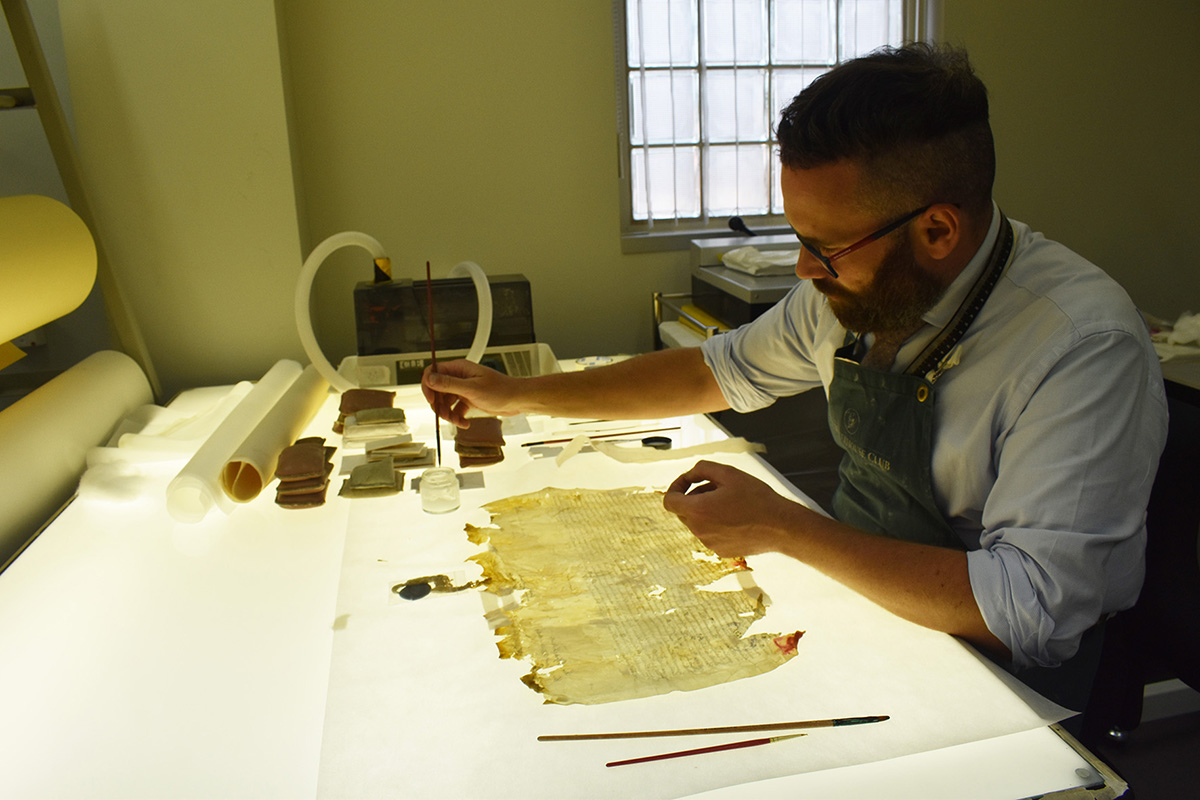 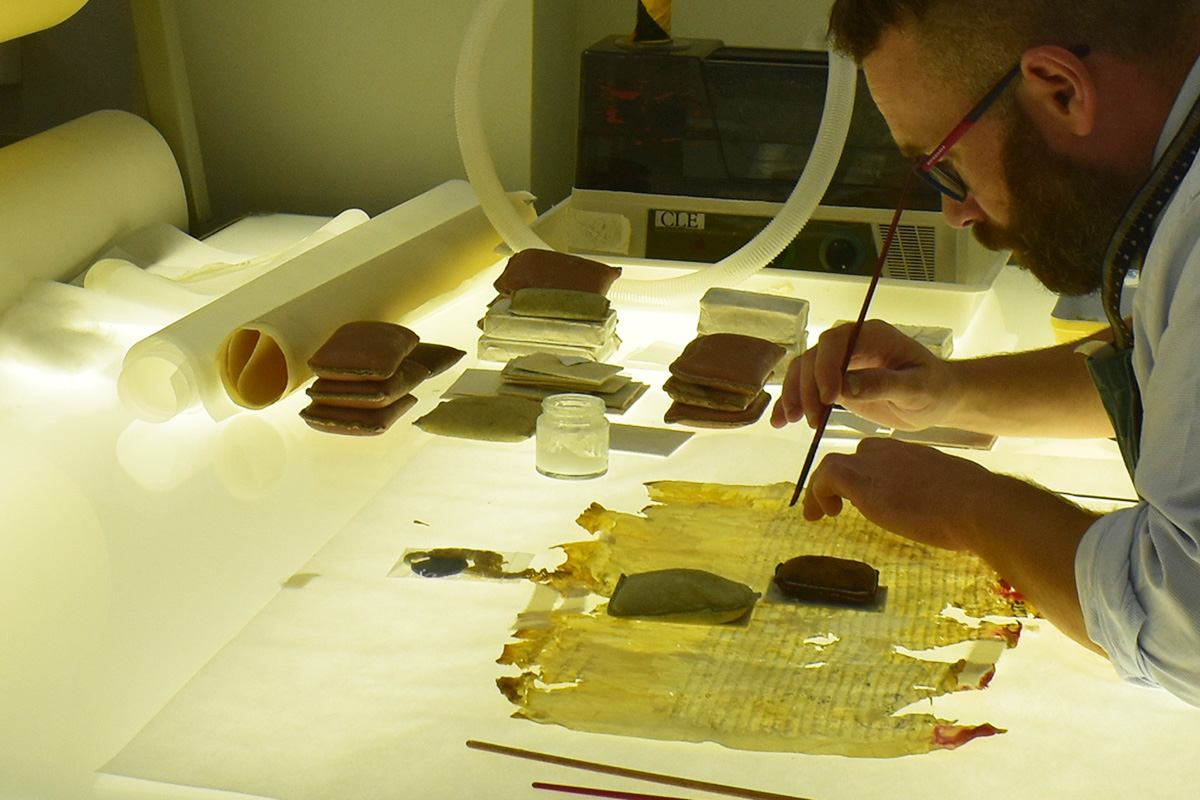 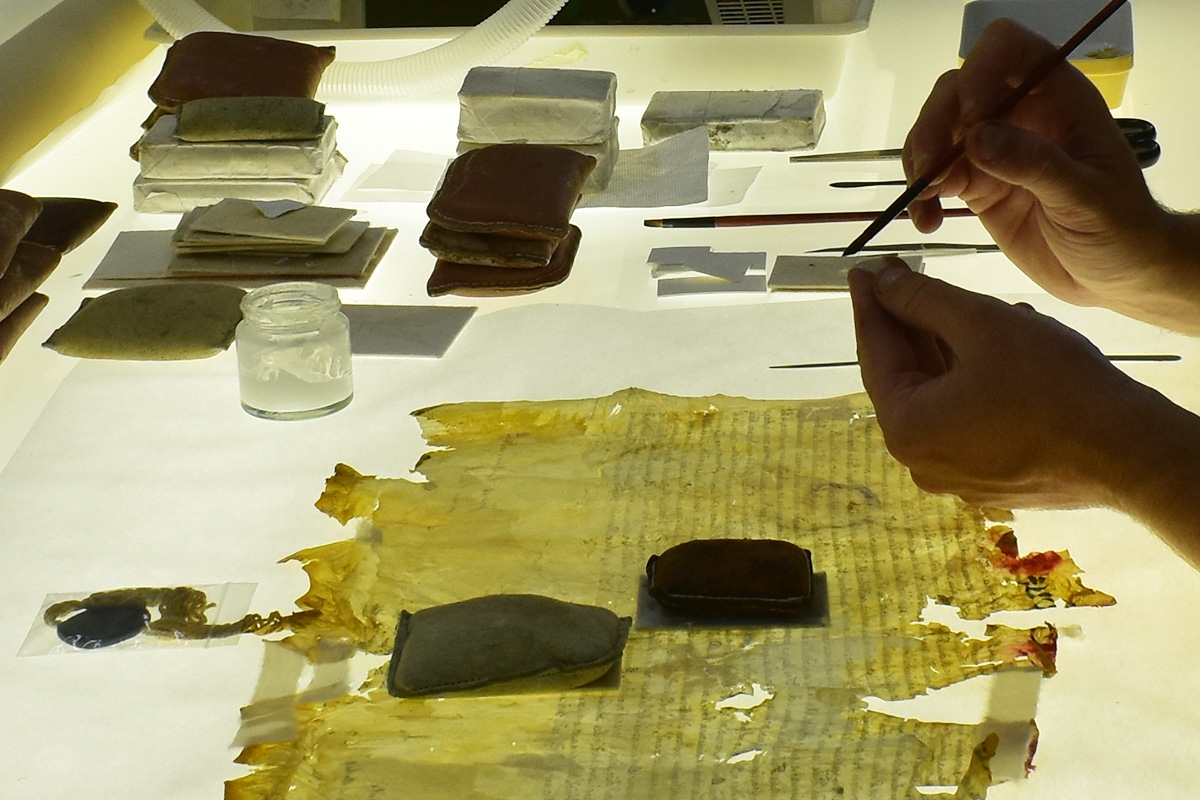 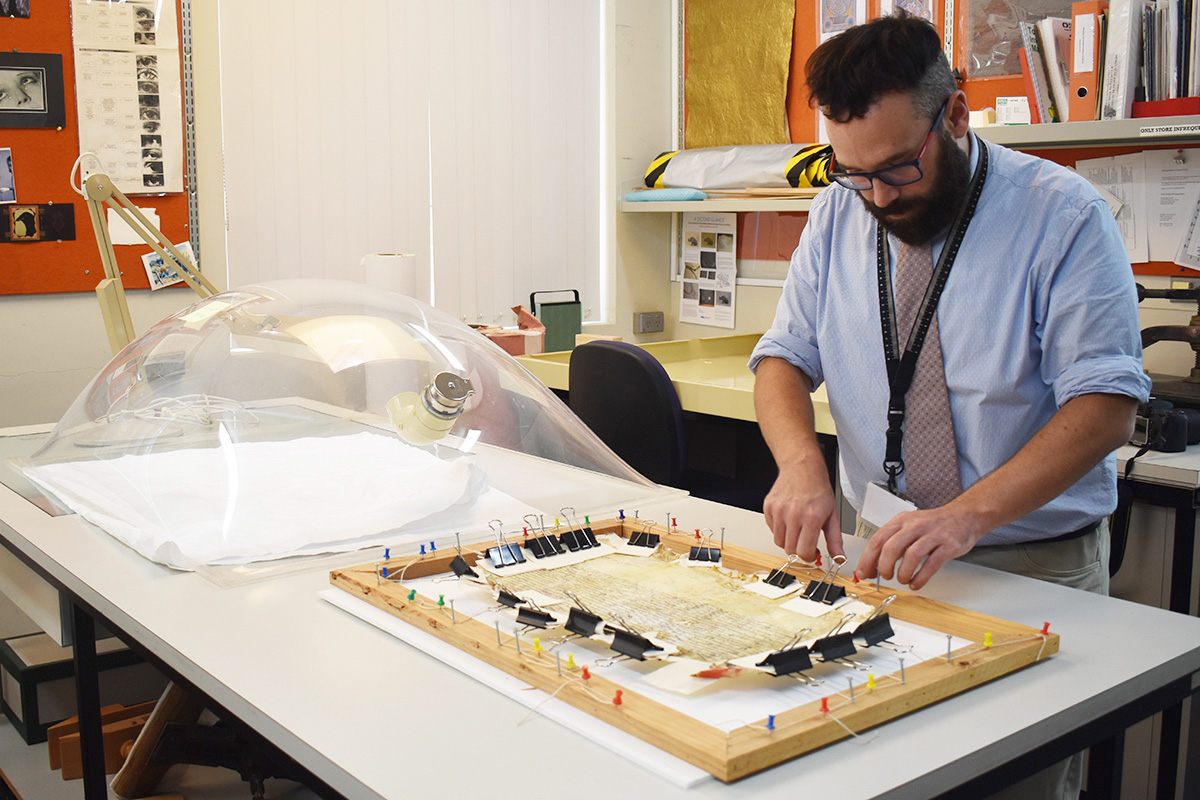 Final stages of tensioning the parchment 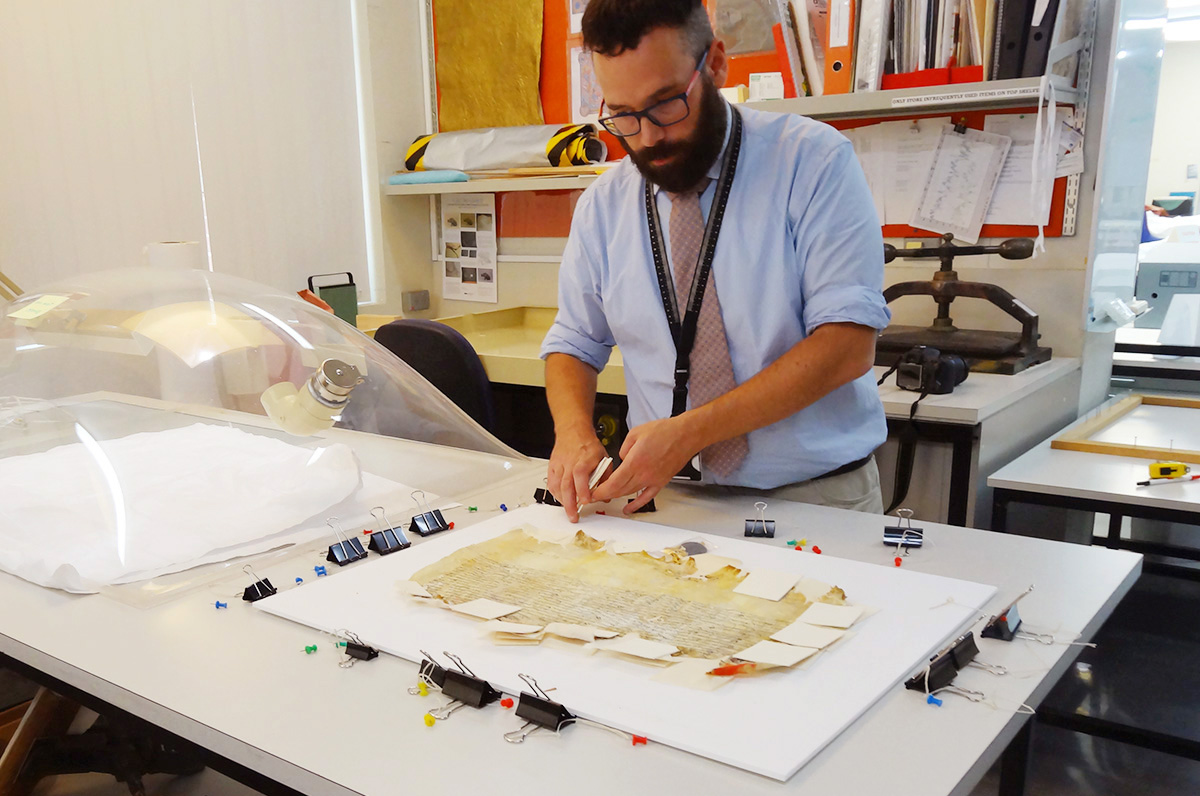 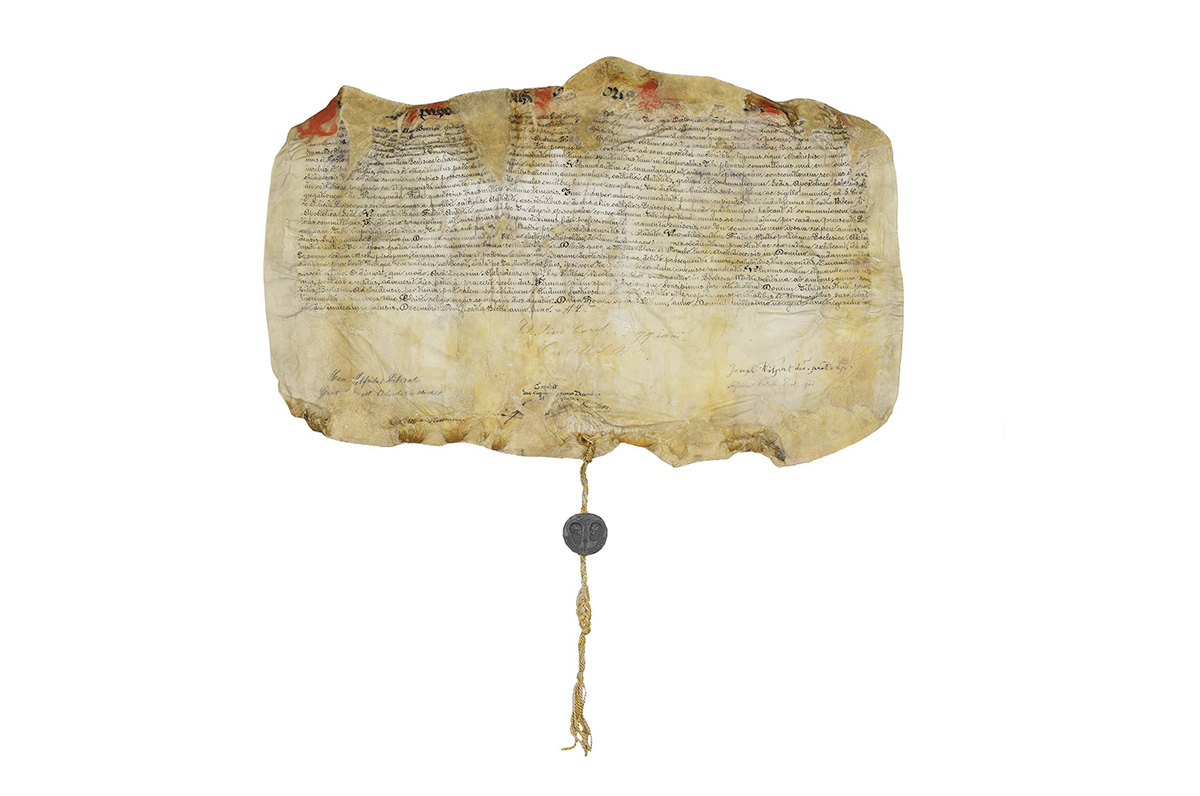 After the final treatment